A musical showcase of our future stars of the stage 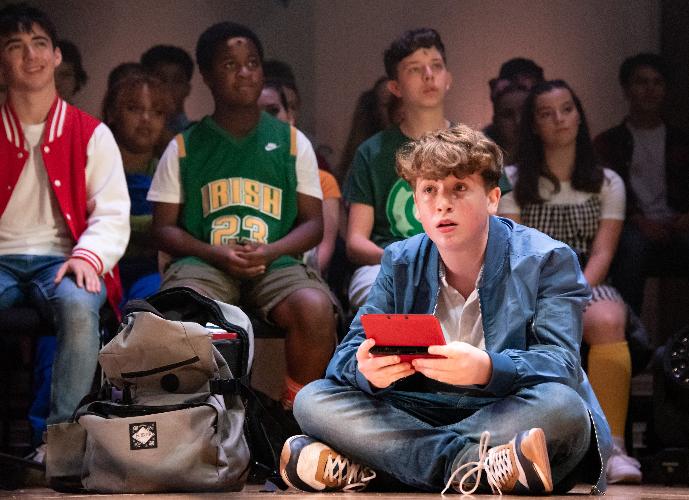 Jason Robert Brown's musical '13', based on the book by Dan Elish and Robert Horn, and directed by Dean Johnson, begins with a focus on Evan, the soon-to-be teenager, preparing for his Bar Mitzvah. When his parents divorce and he is forced to move from New York to Indiana with his mom, Evan is desperate to rebuild his popularity, so his dreams of an impressive party aren't crushed.

Beginning with the track '13 / Becoming a Man', there is a burst of future talent, with the huge cast of over forty teenagers taking to the stage. Despite the audio dropping in places, so some parts were lost, the explosive energy created goes unmatched, and sets the tone for the show, in correspondence with the dynamic choreography by Corin Miller. From the start, it feels as if Edward Flynn-Haddon belongs in the role of Evan, and he only grows more into it as the performance goes on. With strong vocals, particularly demonstrated on his solo piece 'Being a Geek', Edward appears confident, and at ease- definitely destined to shine. Beautifully complementing him throughout is Ivy Pratt as Patrice, who does an amazing job in all her solo pieces, especially 'What it Means to be a Friend', as well as in the duet with Edward, 'Tell Her'. Rebecca Nardin becomes Kendra, the lovely (and highly sought after) one and Zoe Forward excellently plays her feisty friend Lucy, while both going after the same boy: Samuel Menhinick as Brett. Though being an amateur production and having a few faults, there wasn't a member of the cast that I would doubt will go far.
Onlooking throughout, the ensemble are seated onstage- an interesting use of the space given. Although without set to transport the audience entirely, the cinema scene and subsequent rendition of 'Any Minute' were thought to create an amusing atmosphere regardless.

Packed with cliche humour, the sentiment is understood, though it did feel a little uncomfortable and insensitive to have such a significant part of the show mocking Archie (played by Ethan Quinn), due to his terminal illness. In addition, the storyline lacked a little depth- largely rewriting the common 'teenagers seeking relationships, and everyone trying to become popular' tropes, with this causing the original plot about Evan and his Bar Mitzvah to slip. However, albeit not overly catchy, the score as a whole is charming, and the great acting from all made it worth the watch.

Closing the show with 'A Little More Homework' and 'Brand New You', the whole cast come together to illustrate the future of theatre- the perfect showcase for the next generation of stars.