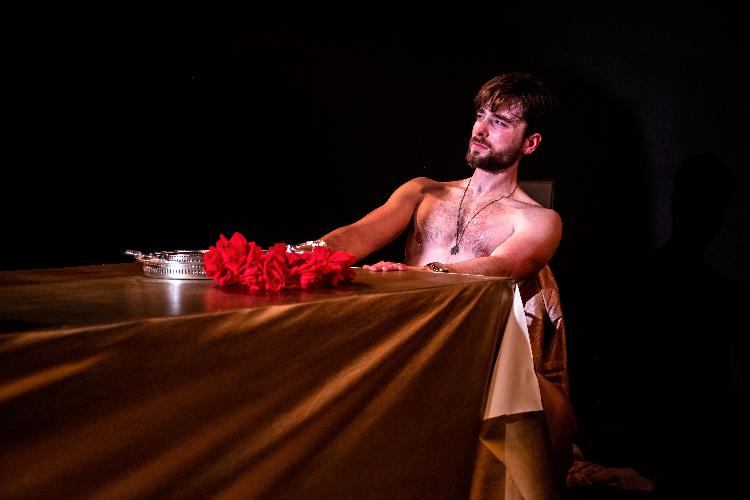 Salomé (Fred Thomas) is a princeling who attempts to seduce the prophet Jokanaan (Prince Plockey) unsuccessfully. Step-son of King Herod (Jamie O'Neil) and son of Herodias (Pauline Babula), Salomé is ordered to dance for King Herod, for which he demands Jokanaan's head from Herod as a prize for their rhythmic efforts.

When resurrecting a script that is more than a hundred years old, at the very least it is expected that there would be a purpose, a contextualising aspect that shines through relevance to today's world. Debuted in France, 1981, the play was banned in Britain as it depicted biblical characters. Its original reviews described the colourful, repetitive verse as "half-biblical, half-pornographic".  Wilde's successful attempts to shock and stimulate were dangerous and effective: The Lazarus theatre company's motives are muddied. To cast Salome as a young man is commendable, and the comments on religion versus homosexuality are important, but since it can be argued that these were already buried within Wilde's script, did it simply exaggerate an already studied subtext? On more than one occasion, the tension and denouement built in this production are anticlimactic and the audience are met with several disappointments.

Director Ricky Dukes uses a lot of fun effects to build this tension but then either disguises the key events with contrived choreography or completely omits them from the stage altogether; Salome's famous dance of the seven veils and the grotesque blasphemous beheading fall short of the outrageous climaxes they seem to deserve.

Performances from Babula and O'Neill were the saving grace of this particular production. Herodias has very little dialogue in an overly flowery prose and yet holds most of the audience's attention whenever they are on stage. While most portrayals give a flavour of what they may think nineteenth-century actors should sound like, Babula gives a very truthful characterisation of power, royalty and scorn. Similarly, O'Neill gloriously offends the audience with his hedonistic Herod.

Design (Sorcha Corcoran) greatly aids the piece: in an intimate black box theatre with traverse staging, it feels as though the spectators are sat around the long gold table with these characters. Attention to detail in the costume, from the hint of gold makeup down to the gold-painted fingernails of the royals, reflects careful consideration of how one can translate an older text for a modern audience. Unfortunately, this is not reflected in the rest of the endeavour.

Although one can applaud the creativity of some of the choices both in acting and in design, there are still so many opportunities that have not been exploited. Wilde's language is long, listful and poetic, it feels as though the Lazarus team need to push a little further to marry the story with their adventurous effects.