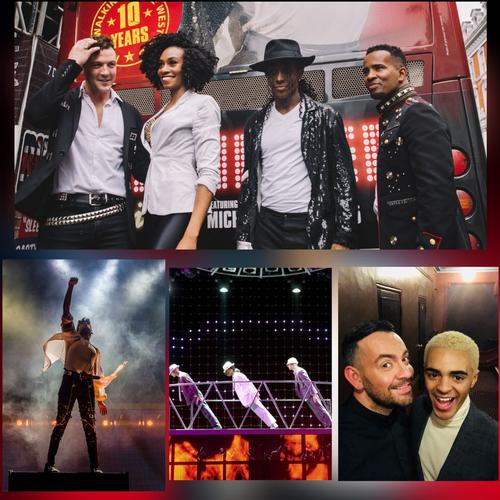 Thriller – Live! is a celebration of the music of The Jackson 5 and Michael Jackson. It had already been performed in the United Kingdom, Germany, the Netherlands and Scandinavia before opening at the Lyric Theatre, London, on 21 January 2009. Thriller Live played over 5000 shows globally to over 4 million fans. Big numbers, right?

The show covers all Michael's hits, song after song. A non-stop party with the four vocalists – Wayne Anthony-Cole, Vivienne Ekwulugo, Haydon Eshun and David Julien – and a very talented group of dancers and musicians, giving it all on the stage for two hours and a half.

Michael Jackson's career spanned four decades: he sold over 750 million albums  and won 13 Grammy Awards. But numbers alone are not enough to establish a legacy. He died when he was just 50. Gone too soon, indeed.

This show is unmissable for MJ's fans and for all the music lovers. It is entertainment at its best. There are too many beautiful moments in it to be mentioned. Personally, my favourite is "She's out of my life". The song was released on Michael's Off the Wall album and was written by Tom Bahler in 1980. David Julien's rendition is an intense moment, absolutely stunning.

This anniversary show was a special one. All the original cast mambers, like Ben Forster and Layton Williams (in 10 years the show had different casts) were present and all of them were on stage for an emotional tribute.

Michael Jackson was a great artist and Thriller Live is a great show. We are lucky to have had it since 2009 in the West End. We have to cherish and nurture it. It is the best place to enjoy MJ's music and legacy.