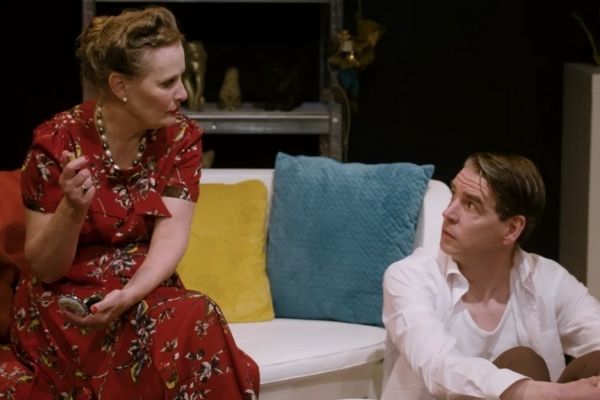 Set in 1950’s Ireland, Lipzync Theatre invites audiences into the dysfunctional home of Eva, or Mammy, and her down-trodden son, David. David is in his late thirties, and all he wants is to marry a sweet girl and escape his mother’s clutches. All Mammy wants, on the other hand, is to have her son to herself. She is gloriously neurotic and rules the household by verbally and physically abusing David. Even though she is the one who keeps prompting him to find someone, she ruins his chances every time he brings home a girl. Enter Ruth. Fiery, red hair and as sugary sweet as she is seductive, she seems uncannily immune to Mammy’s barbs. The audience is forced to wonder: has David finally found someone to make him happy, or is this simply too good to be true?

Pheromone starts off by being a tragicomic glimpse into the life of the residents of No. 19. Midway, the tone changes as it becomes increasingly clear just how vile and destructive Mammy is towards David. Martina McCormack and Eoin O’Sullivan deliver stellar performances as this dysfunctional duo. McCormack is sharp and menacing, while O’Sullivan’s performance is absolutely heartbreaking at times. Co-directors, Kate Conboy-Fischer and Tzarini Meyler, also play the parts of David’s love interests Dawn and Ruth beautifully.

Throughout the play, the use of sound and music is simple, yet effective. It is used to emphasize emotional and important turning points with well-chosen songs from the fifties. For example, there is a neat little scene involving the famous music piece Habanera (from Bizet’s Carmen) and Mammy, dramatically dancing on her own with a red scarf.

Pheromone is completely classical in almost every aspect. From dialogue composition to scenography and even the way it is filmed, the production takes only a few risks throughout and could have benefitted from just a sprinkle of innovation. That being said, the characters are both captivating and realistically written, and the story dares to explore male domestic abuse, something that is often overlooked in story-telling.