The Nobodies is about Everybody 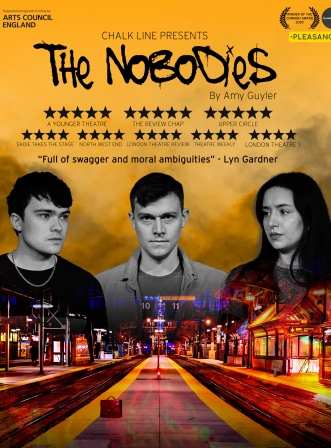 Three friends unite to save a hospital from closure, each for their own purpose.  However, events unfurl (no spoilers here) and the original cause seems to fade by the wayside as unforeseen situations take over.

The leads of the piece are cast so well, sharing space, songs and all the grit and soul of a Broadway show throughout. Standout for me was Joseph Reed as Curtis, the integrity and dignity which Reed has clearly invested in his character, is second to none. Lucy Simpson as Rhea shows her vulnerability ably supported by David Angland as Aaron.

Perfectly mirroring them is the set, simple but so succinct in its structure; complimenting the light and dark, the noise and heat and the palpable fear that rises.

Amy Guyler’s script almost leaps off the page as she throws punch after punch to the current state of affairs.

The Nobodies is a play that must be seen; highlighting just how much life turns on a dime.

It runs until 28 August at the Pleasance theatre in London, and from September on tour. More information here.