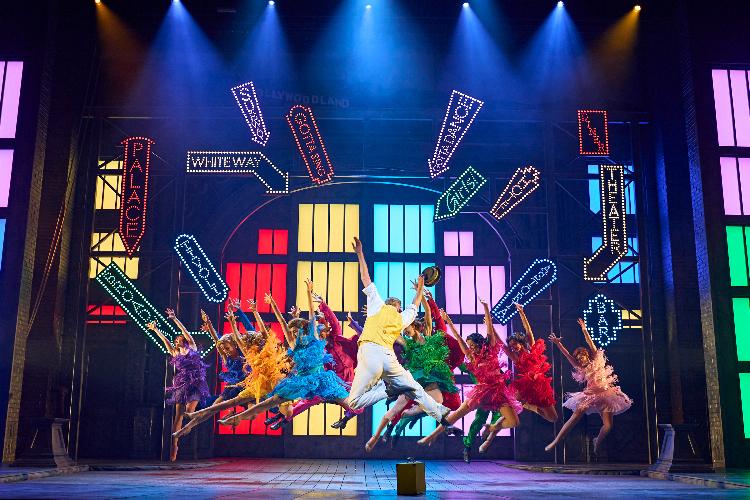 Michael Harrison Entertainment and Jonathan Church Productions present the Chichester Festival Theatre and Stage Entertainment production of Singin’ In the Rain at Sadler’s Wells Theatre. The huge production team behind the show is a clear indication of the sheer spectacle behind this golden age musical. The show itself, an age-old favourite for many, with music and lyrics by Adolph Green and Betty Comden in the screenplay and additional material from Nacio Herb and Arthur Freed in the stage adaptation, that will certainly get you whistling on repeat.

Made famous perhaps by the 1952 film choreographed by and starring Gene Kelly, Singin’ in the Rain follows film star Dom Lockwood, played by Adam Cooper, as he meets love interest Kathy Selden, played by Charlotte Gooch, through miscellaneous coincidences implemented by best friend Cosmo Brown, played by Kevin Clifton. Despite the aggressive conflict of his co-star and on-screen partner Lina Lamont, played by Faye Tozer, Lockwood and Selden make their dream come true in a variety of peachy dance and vocal numbers.

Andrew Wright’s choreography is gold dust. The patterns and sharp coverage of the huge stage at Sadler’s Wells is at the peak of creativity in the industry. The ensemble implements this beast of a show with precision and ease with a great young talent in Amonik Melaco shining through. The incredible fitness and quality of the ensemble is the backbone of this piece as Simon Higlett’s set and costume are manoeuvred with specificity and glamour despite the rapid tempo.

A highlight of the show is found in ‘Moses Supposes’, as Cooper, Clifton and elocution teacher, played by Aastair Croswell, blend storytelling through the triple threats delightfully. Clifton’s charm is never-ending and Crosswell’s ‘character’ performance is perfectly pitched and doesn’t fall into the trap of melodrama. Cooper and Clifton complement each other with grace and clearly enjoy supporting one another.

It is also a treat to see Cooper and Gooch romantically travel the space as they make an incredibly difficult sequence seem as easy as a walk in the park. It’s often harder to translate a story through movement but the couple finds a narrative that is spellbinding. The vocal performance is at times slightly questionable, Gooch’s song that is supposed to win over producer R.F Simpson, played by Cavin Cornwall, isn’t the jaw-dropping showstopper the story requires.

The orchestra is the star of the piece. The incredible sound produced is beyond any replacement during the pandemic and beats the spectacle of insane amounts of rain dropped on the stage. The glorious brass section brings us right back to the golden age of the 1940s and 50s.

It runs until 30 August. Tickets: here.