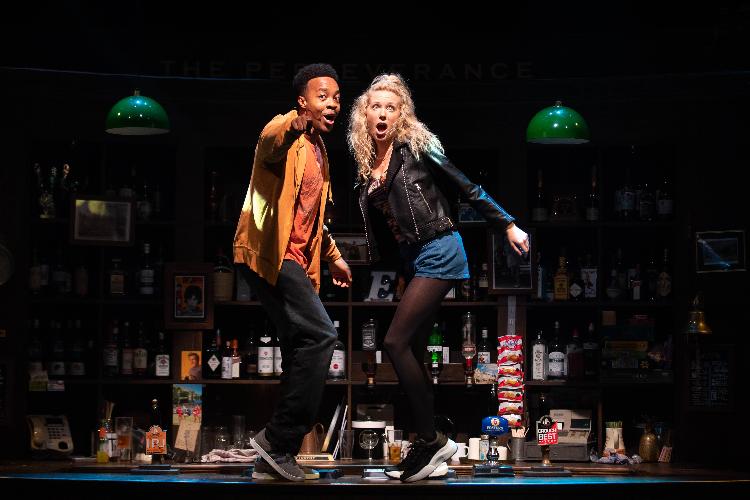 There’s nothing quite like the local pub and the wholesome story shown in Love Letters is set in an Essex local: ‘The Perseverance’. Stories are shared, relationships begin. One is between school sweethearts Danni (Dannie Harries) and Justin (Kit Esuruoso): their relationship takes many highs and lows as they navigate their way through adulthood.

The many stories all take place inside ‘The Perseverance’, the local pub, brilliantly designed by Jess Curtis. The set immediately gives us the feeling we’re in a packed pub on a Friday night as the band sing their songs and reminisce about the best of Essex. The only issue in regards to the band is the music seems as if it’s being shouted at you rather than sung, meaning not always can you understand what’s being said. However, this creates the feeling that you are in the pub with a drink in hand watching the open mic night.

In amongst the heart of ‘The Perseverance’ is landlady Sheila (Lucy Benjamin) who brings comic relief to any scene she’s in. Benjamin is the perfect casting for the role, she embodies what you would imagine your local landlady to be. Where Benjamin’s character rises, others seem to slightly miss the mark. Danni (Dannie Harries) brings charismatic and light energy to the stage along with Justin's (Kit Ersuruoso) clear voice and wonderful physicality. However, Justin and Danni’s relationship almost feels too forced at times and lacks genuine chemistry. The two work well with other characters but the romance struggles to live up to the plots' expectations.

For a show with a full band and a giant pub on stage, spacing seems to be limited. Director,  Douglas Rintoul, rises the challenge to make the staging feel much bigger than what is actually available to the cast. This makes the show itself feel bigger, a clever showcase of Rintoul’s directing imagination and visualisation.

The main story of both Justin and Danni’s relationship and the battle to save ‘The Perseverance’ seems dragged out, and the show could have been condensed into a smaller show or applied more focus as many smaller storylines that were brought up with no answers such as: why didn’t Justin have a relationship with his family? What illness did Sheila have?

All in all, it’s a lighthearted musical about community spirit and high school sweethearts. Showing the town coming together to save something that’s loved by all. It’s a ‘good ole knees up’ night out to reminisce about the area many grew up in and share many memories with a selection of songs from some of Essex’s most successful singers.

It runs till August 21st.