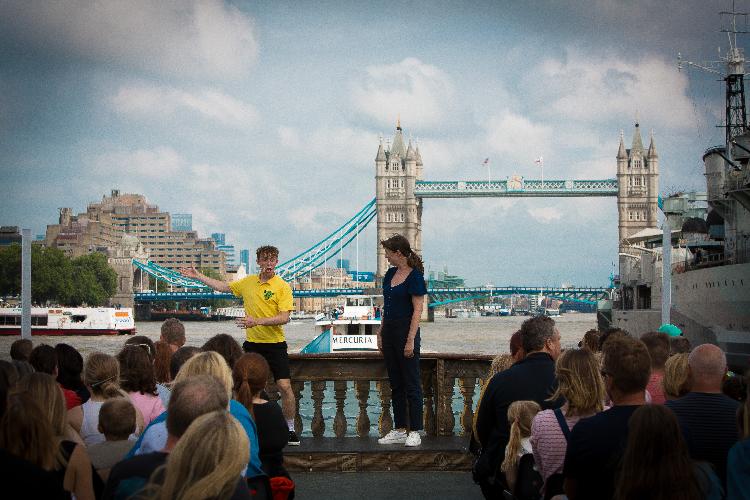 All aboard the Terrible Thames for a fun history lesson that gives you the murky past of what really went on along one of the most famous rivers in the world.

I’m not talking about shenanigans here and there, this is hardcore – executions, beheadings, drownings – it’s got the lot. But in the words of my seven-year-old niece Tara, it was “unbelievable”.

We were hooked from the very beginning of Horrible Histories Live Onboard! You first meet teacher Ben and student Billie (in our slot the roles were played by Ben Eagle and Joelle Brabban) as they run thunderously along the open-air top deck and launch straight into their routine.

Once they started, the gruesome facts, well they just kept on coming, timed beautifully as we glided along the river passing the capital city’s famous landmarks.

Ben and Joelle brought this performance to life with their energetic and enthusiastic acting and back and forth banter with all their grisly and ghastly stories. I can’t imagine how many shows they may have to do in a day or a week, but for us, it was as if it was their first.

And don’t be fooled into thinking that you just sit on a boat and two people reel of facts for 45 minutes. It’s definitely much more than that. The show is given an extra punch with sound effects throughout which were also timed perfectly with their script.

Tara’s favourite sound effect was that of trumping – quelle surprise - she laughed so much and you only needed to look around and see the smiles on all the children’s faces to see they were having fun too.

And to top it off there’s also audience participation with both actors travelling up and down the boat throughout the show involving children and even adults.

And no show like this would be complete without a few sing-alongs thrown in. Again, both actors were so natural and able to get everyone to join in – even my sister and I were belting out “What Shall We Do With The Drunken Sailor” as if we were Mariah Carey live in concert or something.

Tara’s highlights included the singing, the interactiveness which included her mummy being asked to walk the plank and the surprise sound effects.

She said: “I really enjoyed the detail of the stories and I loved how they used children to illustrate chopping heads.”

She was so excited beforehand that she made a small toy for the actors. We didn’t get to give it to them in person but the captain promised to pass it on and boy did he. To our surprise the following day Joelle had taken ‘Pirate Stinky Sam’ on his own Terrible Thames adventure with pictures of him lapping up the fun posted on Twitter.

I may have decided to take Tara on this wicked journey, but you don’t need children to go along. Even as a Londoner myself, I loved it, learning all these new things. Not sure if any of it will ever come up in a sit-at-home Zoom quiz but if it does then I’m armed with new knowledge.

The show has been produced by Birmingham Stage Company and Woods Silver Fleet and written by Terry Deary and Neal Foster. They’ve nailed the art of combining something fun to do with education and injected the whole thing with humour too. Plus, its location at St Katharine Docks at Tower Hill means you can make a real day of it.

We enjoyed it so much we didn’t want it to end. I think that would be our only criticism. We wanted it to last longer because we were having so much fun.

If you’re looking for something different to do – put this on your list. Tickets: here.