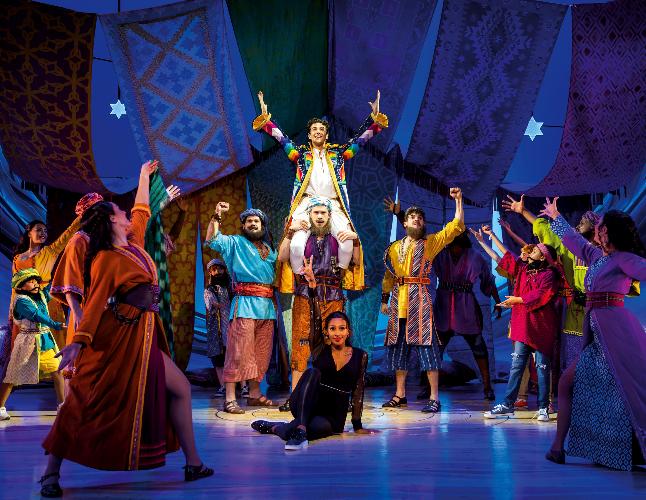 Alexandra Burke as the non-stop narrator is magnetic; her stamina is unwavering, her characterisation is playful and her voice is X-traordinary.  Donning the dreamcoat for the second time after his Olivier nomination, Jac Yarrow holds the audience in the palm of his hand with his rendition of ‘Close every door’ and Jason Donovan returns to the role of Elvis *cough*, I mean, the Pharaoh.

As well as some sweet and sassy young new additions to the cast, the whole production feels very youthful. A classic show is being brought into the “twenty-twenties” thanks to fun, frolicking direction from Laurence Connor and crazy, camp and contemporary choreography from JoAnn M Hunter.

Bren Cracknell (lighting design) and Gareth Owen (sound design) vamped up songs and dance breaks that we all know and love, giving them a whole new vibe with a kaleidoscopic colour scheme and remixed backing vocals.

The stand-out number in this production has to be ‘Those Canaan Days’; the comedy is inescapable and exhausting, timing and teasing were perfected and Morgan Large’s costume design is genius.

From the first note played by the live orchestra, the audience were enraptured, clapping along at any moment they possibly could, cheering and calling out when they were overcome with nostalgia and excitement. They were so involved in fact, that when the entr’acte was performed, the conductor had to take a moment to turn around and face his audience, bewildered and emboldened and thank them before going back to his musicians with renewed vigour and vitality.

You could put it down to the fact that this night may have been one of the first nights that the cast had looked out past the stage-lights to see the London Palladium at full capacity since having to close the show in 2019, but each triumphant smile from that stage and from its spectators was tracked with joyous tears. A very emotional and deserved ovation led to a well-received encore of rave-tastic reprisals. Theatre is back, and it keeps getting better.

It runs until 5 September. Tickets: here.