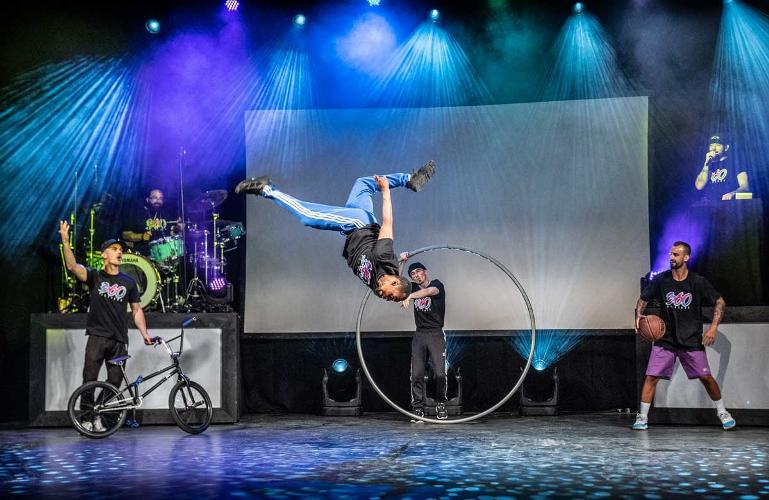 Onyx Productions’ 360 ALLSTARS is an “Urban Circus” comprising of erratic stunts from a group of extremely talented individuals, accompanied by the very impressive drumming from Mikey Sorbello. Hosted by beatboxer Ball-Zee, an energetic and easy Emcee. With a programme of BMX, Breakdancing, Basketball, Cyr wheel and Beatboxing, the 360 ALLSTARS is a well-rounded show for the whole family.

Ball-Zee’s vocal acrobatics is a funny and light way to engage the crowd as he tunes his imaginary drum kit and giving an impressive variety as he warms up to fill the space with an electrifying performance whilst keeping us entertained with witty physical comedy. His ability to relate and play with the audience makes this a highlight of the show and definitely will inspire a generation to get creative with sound!

The 4 or so remaining acts are all highly skilled in their unusual trades. Péter Söre’s BMX acrobatics is impressive and the only real element of danger in the whole show. This is what makes most circus so impressive, the inherent danger gives us thrill. Nevertheless, Söre gives us this nerve-wracking worry as he spins on his BMX in unimaginable ways.

Josh Curtis’ Cyr Wheel act doesn’t seem to quite fit with the energy of the piece, as he masterfully navigates the stage with great skill, but the style is more like a Billy Elliot sequel – beautiful in itself but somehow detached from the other performers. Similarly, Basketball performer Trickstar, shows great focus by juggling while being manoeuvred around the stage on Söre’s BMX – again, a great feat, but it seems to lack elements of danger and excitement.

Breakdancers B-boy Chris and B-boy Daz give an energetic display of floor gymnastics and highly physical break dancing that get the audience excited in no time. The energy they provide is tiring just watching and it’s impossible to count how many times the men spin on all parts of their bodies! This is another highlight but doesn’t quite fit the understanding of a circus.

360 ALLSTARS is certainly an enjoyable family-friendly show full of vibrant sights and sounds. Perhaps it lacks the thrill of danger, but the performers are still much more impressive and talented than anything you or I could do!

It runs until 15 August at London Wonderground.