The iconic show returns at the Coliseum 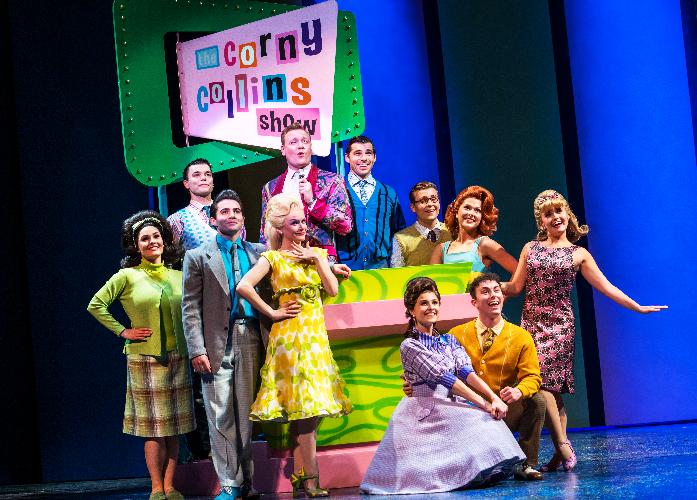 The highly anticipated hit musical, directed by Jack O'Brien, is back: Hairspray is running at the London Coliseum. Packed with utterly joyous scenes, this is the perfect show for everyone to see this summer.

It's Baltimore in 1962, and those with big hair often have big dreams. Tracy Turnblad, played by Lizzie Bea, is striving for success though knows change must come before that can happen. With ambition, she tries to land a role on a local TV dance show, and acquire a boyfriend- Link Larkin, played by Jonny Amies- much to the distaste of snobby teen Amber Von Tussle (Georgia Anderson), all while aspiring to make the world a better place. Political notions on femininity and racial segregation are constant battles, therefore always being current topics, though explored here through dazzling dance sequences (choreographed by Jerry Mitchell) and an infectious score by Scott Wittman and Marc Shaiman. Cleverly incorporating humour to discuss important issues, the show breaks away from its caricatured atmosphere to shed light on these in an upbeat and engaging way.

Opening the show with 'Good Morning Baltimore', Lizzie Bea triumphs- a star shining bright on stage- really displaying her talent through the entire show. ‘Welcome to the 60s’ brings the whole cast together to showcase the combined flair from all. Featuring Michael Ball reviving his critically acclaimed role as Edna Turnblad, the charismatic mother, he excellently fulfils this in every scene entered, but particularly when leading ‘Mama I’m a Big Girl Now’. Les Dennis is the other half, Wilbur Turnblad, and despite not having such a strong voice, he provides lots of laughs, particularly in the hilarious duet with Michael, ‘(You’re) Timeless to Me’. Marisha Wallace, as Motormouth Maybelle, excels once again, especially with an electric rendition of ‘I Know Where I’ve Been’, while Seaweed displays both some killer vocals, and moves to match whenever on stage.

The iconic ‘You Can’t Stop the Beat’ lifts the roof and creates an energetic atmosphere unlike any other, rounding up the show so that it’s nothing short of wonderful.
Fast-paced set changes (devised by David Rockwell) utilise the space well, and Hairspray wouldn't be much without the costumes (designed by William Ivey Long), notably the exuberant and flamboyant numbers that encapsulate the 60s. Though some bits may appear as if they don’t flow and feel a bit odd, this adds to the nature of the show, doesn’t deter from it being spectacular, and a very memorable performance that will keep you thoroughly entertained throughout.

Hairspray has truly earned its legacy, encompassing everything theatre should be.

It runs until 29 September. Tickets: here.