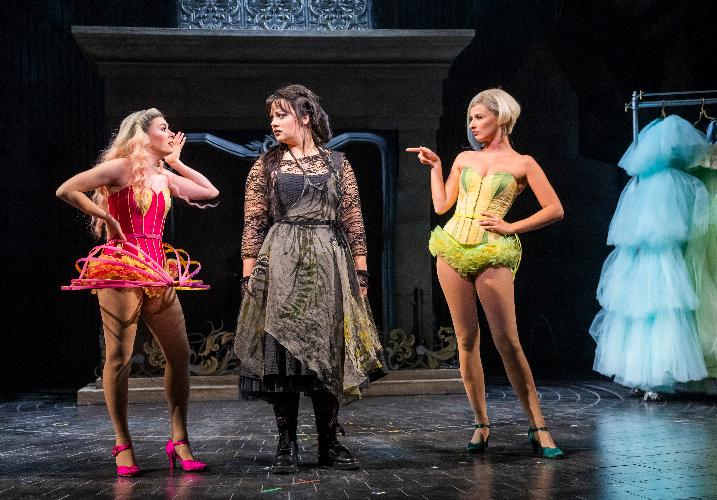 The new Andrew Lloyd Webber’s musical, Cinderella, is set in the mythical kingdom of Belleville. Here, an exhausted Cinderella (Carrie Hope Fletcher) is controlled by her authoritarian stepmother (Victoria Hamilton-Barritt) and her two stepsisters Adele (Laura Baldwin) and Marie (Georgina Castle).
Luckily, she can count on a good old friend, Prince Sebastian (Ivano Turco), pushed under the spotlight by his brother, Prince Charming (Caleb Roberts), who disappeared, leaving their mother, the Queen (Rebecca Trehearn) and the people of Belleville heartbroken.
Something needs to be done: the Queen decides that it is time for Sebastian to get married. He will choose his new wife at the ball.

If the story sounds familiar to you, it’s because most of the elements of the magic tale – that we all know – are present in this musical, directed by Laurence Connor from a book by Emerald Fennel.
Belleville is “the most beautiful village that you’ll ever find, with the most beautiful people you’ll ever see”. But beyond the surface, nobody seems to be really happy.

Sebastian and Cinderella are restless and troubled souls. Something needs to change, but what? Can their relationship save them, when everything else seems to fall apart?

The austere and simple set, designed by Gabriela Tylesova, is helped by a colourful and entertaining choreography, which, especially in the second act, gives some life to the story.

Ivano Turco is a perfect prince who doesn’t want to be a prince. He is oppressed by his mother and by the events, and his struggles become real when he sings the beautiful “Only you, lonely you”, the best song of the show. Two other songs “I know I have a heart” and “Bad Cinderella” impeccably performed by Carrie Hope Fletcher stand out amongst the others, which are at times repetitive and long.

Sebastian and Cinderella are the two most likeable characters, while the others are somehow over-the-top and require overly-exaggerated, pantomime-ish acting.

Innovative is the use of the revolve: in the second act, the first rows in the stalls move slowly until the stage becomes the centre of the theatre. After a few minutes, they slowly go back to their initial position.
In what has become an incredibly turbulent year for theatres, any piece of new theatre should be celebrated. So, we welcome this new Cinderella. But, this time, she has lost not only her shoe, but also some of her magic.