Sh!t-faced Shakespeare is back for the 5th year at Leicester Square Theatre 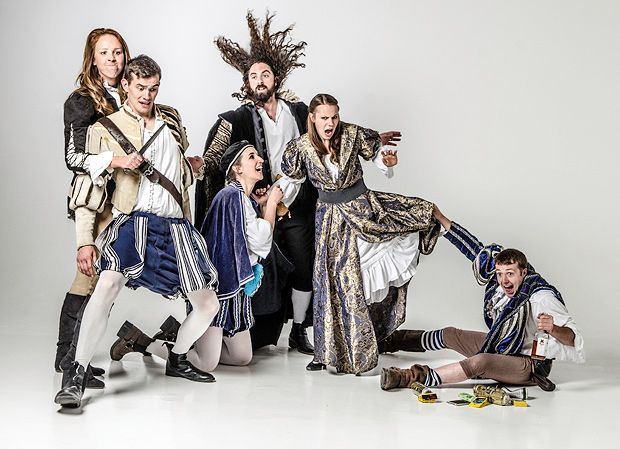 In conversation with his lead actor, Richard Burbage, Shakespeare supposedly said “I will, myself, admit that appreciation of my work is much improved by drink”: In the most extreme way, I believe that the Sh!t-faced team prove him right.

Our players’ raucous recount of the Scottish play transforms a tyrannous tragedy into a car-crash comedy with just a little (or a lot of) help from the good ol’ spirit of wine (or Budweiser). It is quite incredible to see a seasoned actor flail and corpse on stage and still have the audience on the edge of their seat; James Murfitt is a prime example of this. Despite being absolutely off his trolley he was still very much able to make us laugh with him and not just at him. With a rotating cast, one could imagine it difficult to find the synchronicity within a group to keep the play on track as well as seize opportunities for drunken improvisation and slur Shakesy P’s script, but the cast succeed hilariously with stand-out energy from Will Seaward and Flora Sowerby. Although it is true that the omissive moment’s sans inebriate lack gravitas, they end up being coloured with some pretty choice references through the power of callbacks. I know that I never would have thought William’s words would blend so easily with the 1993 comedy sports film Cool Runnings. It’s smart, it’s slick and it is very, VERY silly.

These shows are SO much fun, a riotous night out, and an excellent bastardisation of the English curriculum. Once more unto the breach of decorum, dear friends!