A love story of a boy, a girl....and the supercomputer 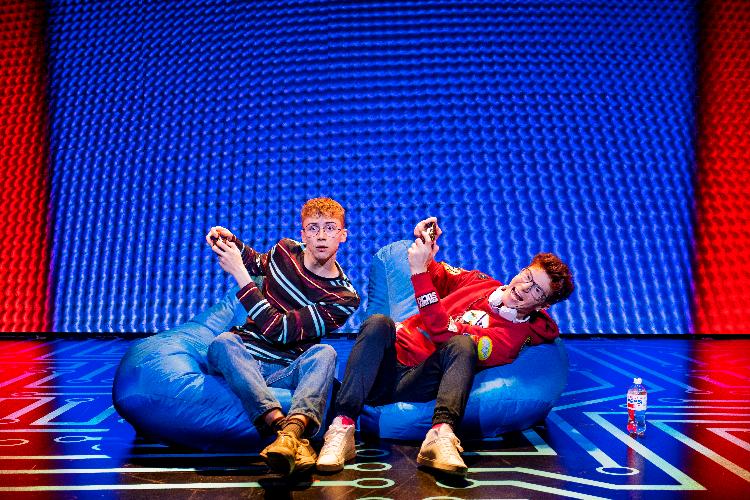 Whilst many kids have missed school due to lockdowns, West End has been busy bringing school to the theatres. There are older hits like Hairspray and Everybody’s Talking About Jamie, to newer shows like Heathers and the latest arrival, Be More Chill. The musical opened last night at the  Shaftesbury Theatre. But what is it about school that makes it a juicy playground for theatre?

Jeremy is your average teenager. He’s not one of the popular kids, he’d rather geek out playing video games with his best buddy Michael. But everything changes when Jeremy signs up for an after school playgroup and meets Christina. To make an impression on her Jeremy takes advice from one of the school bullies about a mysterious pill, The Squip, from Japan that can “upgrade”  his brain and teach him how to be more cool. Whilst Jeremy finds success in attracting the girls,  neglecting Michael, The Squip starts to live a life of its own inside him and plans to take over the world.

The musical, based on Ned Vizzini’s novel of the same name, is a medley of sci-fi fantasy, every possible high school cliche and villain straight from The Little Shop of Horrors. Joe Iconis and Joe  Track’s musical adaptation plays well with silly goofiness, especially with the lyrics, but lacks emotional depth. Where Hairspray and Jamie deal with acceptance, Be More Chill’s core is displayed in a song explaining if you love someone you put your pants on (The Pants Song).  Whilst this is a declaration of putting your own feelings and issues aside to help a friend in trouble and wholly suited to the comic style of the musical, it doesn’t quite give enough gravitas to justify a two-hour show built around it.

Stephen Brackett’s nearly concert-style staging is effective in its simplicity and feeds off the energy of the young cast. However, the joke on singing off-key is funny initially but leaves you wondering on few occasions are we still joking? The real star of the show is Chase Brock’s choreography that pulses with life, and in ‘Two-Player Song’ hits a home run with its clever concept of video gaming as movement.

We’ve all had good and bad experiences from school, making it so relatable backdrop for drama,  and Scott Folan captures Jeremy’s struggles, nerdy physique and traits perfectly. His transformation from the awkward Jeremy into The Squip driven monster is believable and we really get to sympathise with him as we hit the finale. Blake Patrick Anderson’s Michael is truly the star of the show, delivering the musical’s catchiest and perhaps the most emotional song ‘Michael in the Bathroom’. His voice is full of an earnest plea of being recognised by his friends.

There are many great ensemble moments and the musical allows this young cast to show off their talents. Whilst the cast works overtime to sell the show it cannot hide the fact Be More Chill feels more like a Sunday afternoon sci-fi movie romp.

It runs until 5 September.