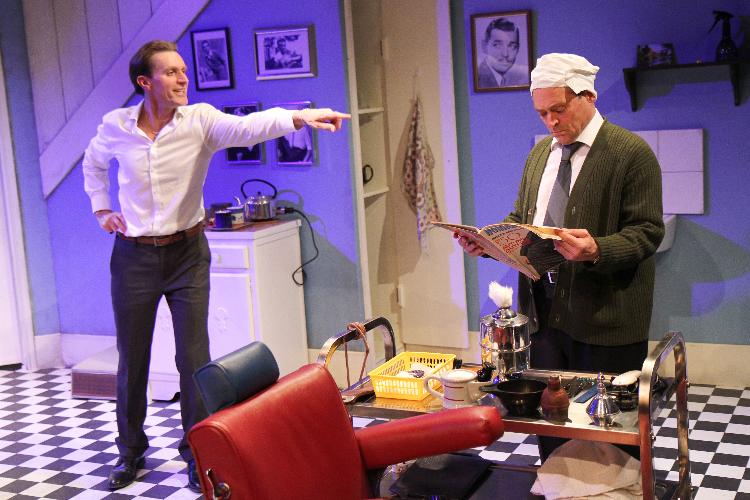 2's Company revival of Charles Dyer’s Staircase is a 1965-time capsule giving us the opportunity to experience the suffering of a gay couple in a relentless society. Tricia Thorns’ revival is exciting and thought-provoking, with detail down to the very dressing gowns!

The 120-minute duologue follows the shocking news of a court summons for ‘Charlie’ played by John Sackville and the affect this has on his relationship with ‘Harry’ played by Paul Rider. The two men, living and working together in the barber shop, are like peas in a pod – forever whittling on and knowing exactly the right buttons to press. Dyer sums up the characteristics perfectly: Charlie likens himself to a fly in a milk bottle; whereas Harry explains he is a fly around a fishbowl; forever an outsider.

Sackville and Rider complement each other brilliantly. What one lacks in patience, the other maintains in complete resolve. They are like the two poles of a battery, with Sackville’s Charlie charging the stakes whilst Rider’s Harry offers a calm support. The relationship, however, has a sharp sting as we adjust to the sardonic undertones and derogatory jibes, born out of Charlie’s anxiety, induced by the court summons.

This energy between the two gents is activated by Thorns’ creative use of the space whilst retaining social distancing amongst the performers. The intimacy of the reduced capacity Southwark Playhouse Theatre sucks us right into the world of Alex Marker’s set design – a very believable 1960s barbershop, fully clad and visually stunning. Thorn manages to create this rollercoaster journey in a fast-paced dialogue with little variation on the setting but focussing on the quality of the relationship and manipulating the intimacy of the space.

Unfortunately, this intimacy has its consequences in that you can hear so much as a pin drop… or a glass smash from an out-of-practise theatre goer… however, both performers tell the story with such integrity it is difficult to be distracted for long. What’s equally as exciting about the proximity from audience to stage is the physical and vocal connection between player and spectator: seeing the sweat on Sackville’s forehead as he works himself into a state is storytelling beyond the TV screen. Likewise, Rider’s command of his vocal gear shifts from his passive support to his sheer frustration is so visceral in the small space.

Thorns’ revival is an important talking point as we eventually start to socialise again on a more regular basis; the conversation of feeling comfortable in society regardless of one’s orientation is as prevalent today as when it premiered in 1966. Staircase at the Southwark Playhouse Theatre is a great show to experience the intimacy of a reduced audience capacity combined with top quality acting and brilliant direction.