The Showstoppers are storming back to the West End 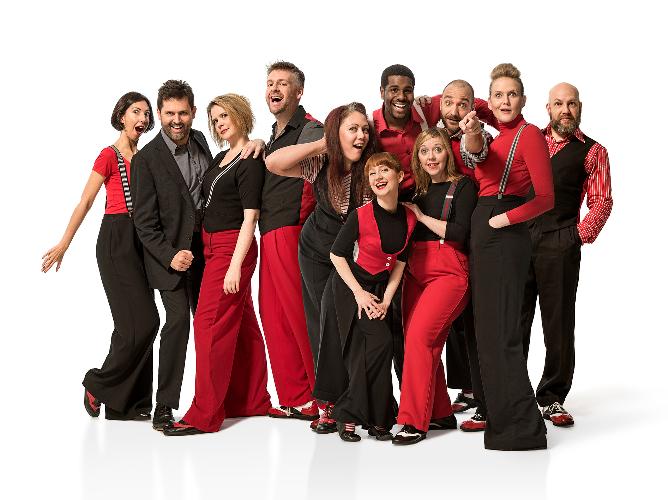 To many people, sitting in a theatre waiting for a show to start can be one of the most exciting experiences around. The feeling of not knowing what to expect heightens the emotions of the audience as they wait in awe to see the curtain rise.

The team at Showstopper have seemingly managed to create that wonderful feeling of the unexpected into a repeat outcome for their audiences. Setting themselves the task of creating a full 75 minute long Musical with catchy songs, clever dance routines and funny scenes purely from the suggestions of the audience, and every performance is different.

We were treated to the incredible improvisational skills of Adam Meggido, Pippa Evans, Justin Brett and Lucy Trodd with music provided by Chris Ash on keys and Craig Apps on percussion. The performance was quite simply ‘HILARIOUS’. A brand-new musical was created before our eyes, about a murder at a dog show, named ‘Dog Gone’, complete with a fantastic finale number in the style of The Lion King. There were wonderful twists and turns, all from audience suggestions and all leading to hilarious moments on the stage. There were genuine moments of laughing so hard that my glasses nearly fell off.

The amazing team at Showstopper: The Improvised Musical show that they have a complete understanding of comedy, and they will know how to have the audience on the edge of their seats.

I would also like to add, after having so much time away from theatres due to the shutdown, the Front of House staff at The Garrick Theatre were fantastic at creating a safe and welcoming environment for all.

Showstopper: The Improvised Musical perform at the Garrick Theatre once a month with upcoming productions on 5th July, 9th August and 13th September. Tickets here.