A musical about and set in the world of the internet 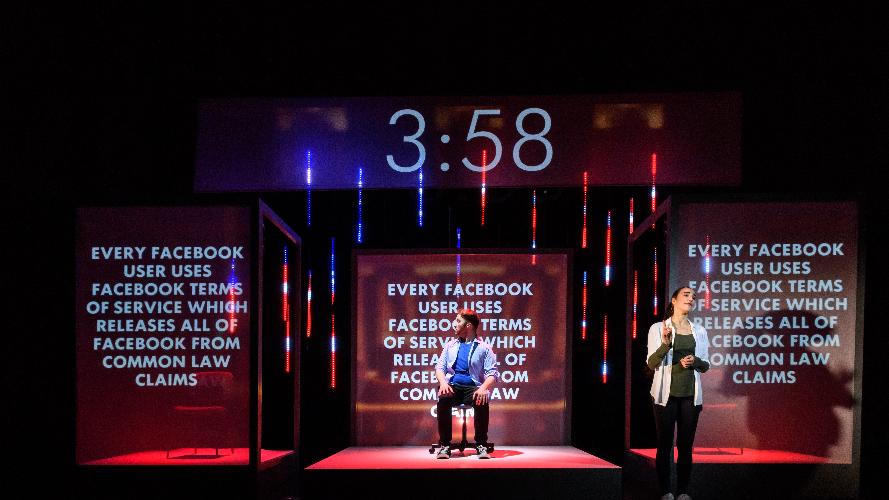 Following its digital debut at Southwark Playhouse Public Domain finally gets its world premiere in front of a live audience as part of the Nimax Theatre’s Rising Stars Festival. The new musical has been likened to popular Netflix programmes, Social Dilemma and Black Mirror, and takes us on a 75min spin on the dark side of the internet: social media.

Public Domain is a new verbatim musical written and performed by Francesca Forristal and Jordan Paul Clarke. It follows a vague storyline of Facebook’s inception with a simple concept of connecting people to its more recent privacy hearings, and the ups and downs of two vloggers.
All told through upbeat dance music that keeps the show pulsing swiftly towards its inevitable
doom.

Like social media, it is easy to get lost in this musical, and in the end, find yourself somewhere completely different than where you started from. Adam Lenson’s production captures the sense of urgency and cacophony of these voices that keep creating content, looking for validation, and burning themselves out whilst trying to achieve the dream of millions of likes or clicks. It also reminds us how technology can bring us closer, especially with our older generations. But it makes you ask, is anyone hearing the cries of help of these millions of people sharing every inch of their lives and who bares the responsibility in the end?

On top of the stellar performances by the creators, who totally transform themselves into a myriad
of characters throughout the show brilliantly, is Matt Powell’s video design. Granted, the visual
look bares similarities with Dear Evan Hansen, but this projection is fully in sync and interactive
with its performers. Together with George Lyons’ movement direction, it creates a striking
combination, blurring the lines of reality and ‘content’.

Whilst this musical comedy is a thoroughly enjoyable cocktail of the pros and cons of social media, creating humour from its cliches and stereotypes from gym posts to cat videos, the show can start to repeat itself. It fully captures the essence of the never-ending daily cycle of millions, engaging in social media and screaming into the void and hoping to make a connection. Though this performance fully connected with its audience, it paints a bleak future for those only living online.

Public Domain is on until 30th May at the Vaudeville Theatre.