Island life isn’t for everyone 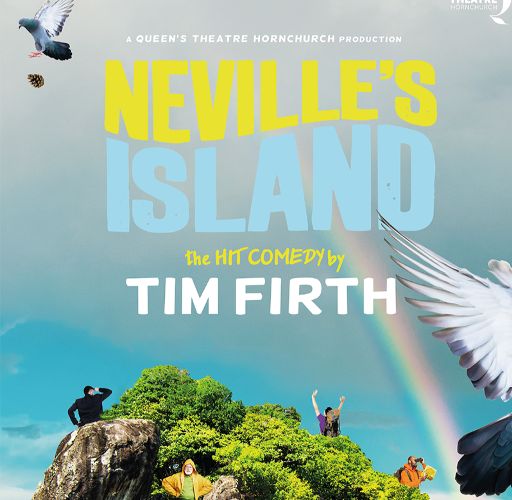 Could you imagine being trapped on a desert island with 4 middle managers, with no idea how to survive and just a single sausage to share between the four of you? Anarchy ultimately ensues for our quartet of survivors Neville (Sean Michael Verey), Gordon (Philip Cairns), Angus (Beruce Khan) and Roy (Stephen Leask).

Before I dive into the show itself, I’d like to give recognition to the creative team behind the show, from the island set design (James Button and built in house by the Queens Theatre Hornchurch Workshop) all the way to the lighting (Stephen Pemble) and finally the director Emma Baggott, their work combined to make a believable and engaging production. The set mimicked an island and provided a useful backdrop, the lighting helped to create the contrast between light and dark and plenty of effects to show the elements you may encounter in the wild. Finally of course the direction from Baggott helped to add the sense of believability and realism that allows you to envisage yourself being in the scenario.

As for the show itself, it had a rather unseen context providing a unique and funny perspective. It very much felt like the four friends mirrored the friendship from ‘The Inbetweeners’, replicating their bickering and joking at each other’s expense. The humour felt directed mostly at a more mature audience, as they can find themselves relating to the characters lives and comments better – however it can miss the beat for the younger generation as they are yet to battle through the trials of middle management and adult life that are mocked frequently.

However, it could be down to the writing, in the sense that a lot of the jokes seemed too forced and appear more awkward. Don’t get me wrong the show was definitely a good hearted laugh. The cast did everything to carry the show by adding their mannerisms and energy to deliver the jokes and bring the story alive, another nod to Baggott’s clever direction as the comic timing is there and attention to detail can be noticed.

Each character comes with their personality and each mix together to form what can clearly be seen as a dysfunctional group of colleagues trying to make sense of the situation they’re in. Neville plays the group leader well as a man who tries to be positive despite believing it’s his fault but feels the responsibility to put this right. Angus is very much nails the comic timing, the slapstick idiot who despite his best intentions seems to continue to make mistakes. Roy who has returned to work after a breakdown makes a nice addition as the go-to for defusing tension but also the cause of tension. Finally, Gordon, who struggles the most with being trapped on a desert island due to enjoy finer things in life. His consistent angry tone throughout can sometimes lose the humour within his lines, however his discontent is a comical comparison to the 3 other middle managers, one with a newfound devotion to God, one with an unwavering devotion to his wife and one with an unfortunate devotion to cryptic clues. Ultimately, it becomes too much for all as they become increasingly frustrated with each other and the predicament they’re faced with.

Despite the script being heavily layered with comedic elements, the writing still comes off as trying too hard to be funny. The actors do well to hit each joke which shows the capability of the four and how well they band together to not only survive their island ordeal, but create a unique and comical show.