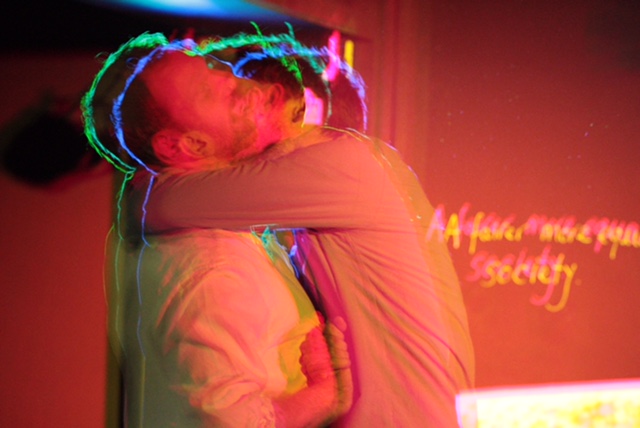 An Honourable Man is a thought-provoking topical play by Michael McManus and charts the rise of a populist leader post-Brexit who taps into a fragmented society using immigration to get to the top.

Joe Newman (Timothy Harker) is the mainstream Labour MP for a traditional, working-class constituency in the north of England – until political circumstances result in him going it alone as an independent candidate. His new-found fame gives him a stage to unleash political instability in an already unstable country.

He’s egged on by his advisers Anne (Lisa Bowerman) and Sam (Max Keeble) and then given a conflicting voice from his neighbour Liz (Dee Sadler) but in the end Joe marches on with a campaign that exploits people's concerns on immigration.

The play is current, gritty and uncomfortable in places when you’re confronted with the stark reality of how one man has got into the minds of many  - using the ‘them and us’ argument to divide and conquer.

Combine that with an all-white cast and audience at the White Bear in Kennington (yes, really!) aside from one ethnic reviewer, and well, it was slightly awkward.

Behind all the insightful politics there were some great laughs, some bad but still funny jokes, Shakespeare, love, heartbreak and sofa-chat.

The acting was decent, the set was simple and well used. That said, like the Brexit negotiations it did seem to drag on, with several people shuffling around in their seats towards the end eager to have a stretch.

An Honourable Man is on until Saturday 8 December.