I could use a drink - Review (Online Streaming)

A celebration of the chaos and beauty of youth 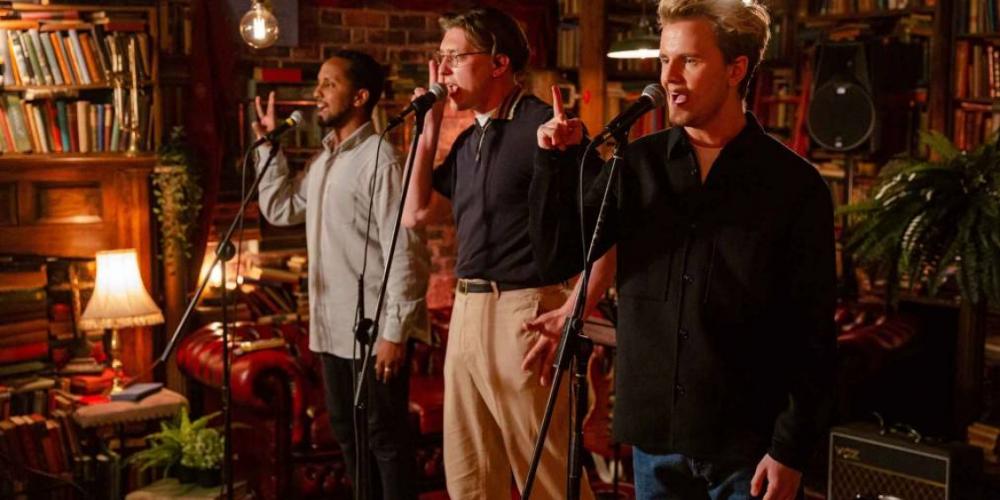 Written by Drew Gasparini and produced for the UK premiere by Liam Gartland and Alex Conder, ‘I Could Use A Drink’ is a song cycle following the relatable and challenging stories that many people (particularly young people) face. The lyrics challenge the stereotypical ‘tits and teeth’ approach to musical theatre that has dominated the genre for a long time. The production is very different from the original US cast.

The intimate space of the Fiction Studios creates a cosy atmosphere as the hugely talented band warm the room, with musical direction from Flynn Sturgeon, Alex Maxted on the drums and Emily Roberts on guitar. It’s disappointing to see a lack of visual attention to such an integral part of the performance. A tiny feature during the intro of one of the final songs introduces us briefly and tentatively to the incredibly talented musicians.

The cast features Ahmed Hamad, Tom Francis, Luke Bayer, Maiya Quansah-Breed, Olivia Lallo, Caroline Kay and Billy Nevers. The ensemble power through with some exciting moments such as Nevers’ ‘I Loved You Too Much’ and an incredible performance of ‘Circus’ from Caroline Kay launching us into a macabre ‘Grinning Man’ style chapter. Likewise, Quansah-Breed’s vocals fill the space with a powerful and electric sound.

Unfortunately, the pandemic restricts audience from attending which leaves the performers staring off into the distance at a ¾ profile from Videographer Jake Waby. This leaves the performers awkwardly huddled up to the microphones with very little/no universal direction. Some of the performances appear unnuanced, having very little emotional effect or struggling to find a journey, leaving them cliched and stilted. The light moments of warmth and wit are completely transparent in ‘A Little Bit’ as Bayer struggles to find the comedy.

The vocal performances are brilliant, and the talent of the cast is outstanding, but the real connection to the stories is a lot less polished - as seen with the awkward physicality and spasming hand gestures. This is partly understandable with a song cycle as they don’t have a book leading the narrative. However, Gasparini has written stories through his lyrics that deserve as much attention to detail as a Christopher Marlowe play at the National.

It is great seeing ‘new’ work such as ‘I Could Use A Drink’ being produced in the UK and that’s down to the efforts of Gartland productions.