A new play about the work of Auschwitz survivor Primo Levi 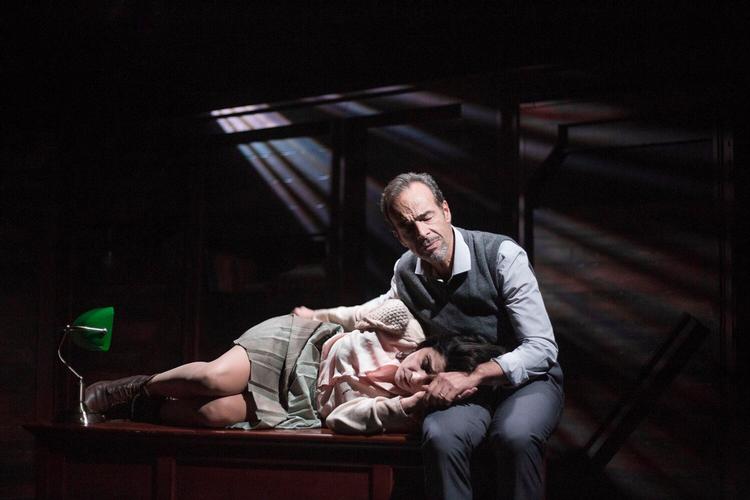 This is a dark, emotive, and thought-provoking play based on Auschwitz survivor Primo Levi who is haunted by two things - ghosts from the concentration camp and the prunes his wife won’t stop buying him.

Primo (Marco Gambino) is there on set as you arrive to take your seat at the Tristan Bates Theatre, with his back to you standing smoking a ‘thinking’ cigarette. The play opens and confirms just that, he’s struggling to write and articulate the stories of people he met in Auschwitz and his imagination brings these people to life on set.

Null Achtzehn (Eve Niker) drags herself around the stage throughout the play dressed as a prisoner of the camp, her body shaking as she’s barely able to walk, her mouth wheezing, sounds that still haunt me now as I type. There on stage it was shocking, but it was real and brilliantly acted out.

We meet Primo’s wife Lucia (Paula Cassina) who disturbs his imagination and brings the play back to reality. She invokes the humour in the play. We’re introduced to her obsession of buying prunes to help Primo’s ongoing stomach issues – the only problem is he hates them but can’t seem to tell his wife that. The fruit is then cleverly weaved in and out of the play as the lead character flits from reality to his haunting memories.

You feel guilty for laughing but the comedy is brought to you in such an endearing way that you can’t help but have a few of those laugh out loud moments.

As the play goes on we meet more characters with Alex Marchi playing six different people stalking the stage at different times.

At one point the theatre is plunged into darkness as Primo starts a monologue, your sight fails you but your hearing comes alive. His voice takes your mind to the concentration camp as if you are there, hearing the voices, the screams of innocent people being led to their deaths. It was breathtaking and there was a part of me that wished that moment had lasted longer so I could feel even more emotion.

Yes, the story of Auschwitz has been told time and time again, but not like this. Drowned or Saved? is original with outstanding performances by all four actors.

The grim story means it’s not a particularly fun way of spending an evening but it’s memorable, authentic and keeps history alive.

It’s running up until 24 November.