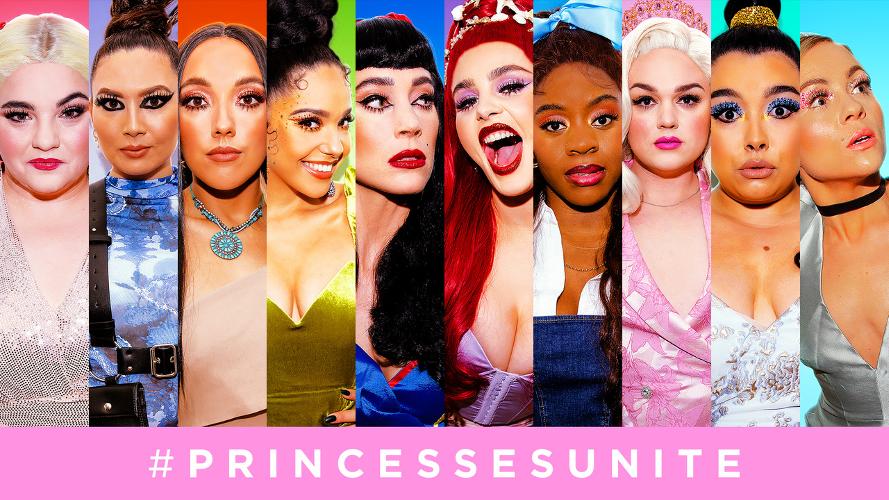 As we trail along the roadmap slowly leading us back to theatres, let us not forget the incredible performances that are still coming to our screens, and Disenchanted is one not to be forgotten. This new musical comedy, which has previously received excellent responses and award nominations as an off-Broadway production, is an absolute joy to watch.

With the book, music and lyrics written by Dennis T. Giacino, we see our well-known Disney princesses come to our screens with an unfiltered and honest musical telling of their stories. With an astounding female cast, with performers such as Jodie Steele, Sophie Isaacs and Millie O’Connell to name a few, this production was already set to be nothing less than sass-fuelled enjoyment. Dealing with issues of sexism, race, body image, and sexuality, this eighty-minute show was empowering and truthful, highlighting many societal issues that are caused by ‘The Princess Complex’ which is engrained into our minds as young children.

At the start of the show, we learn that rehearsals were over Zoom, and the physical filming of the show took place all in one day, during lockdown. It is amazing to see the skill and determination that was put into the production of this piece, and although a little simple in location and some lip-syncing a little off time, costumes were stunning. Each outfit was inspired by the traditional princess dress, yet was transformed into contemporary, stylish looks pulled off beautifully by those wearing them.

As a musical parody, silliness is at its forefront; but this does not overthrow the powerful messages behind each song. One after the other, we work through the princesses’ fairy tales, with other characters hilariously featuring as backing vocalists in the dramatic key changes. With each character having very different personalities, yet all coming together to axe the patriarchal filter that has been placed on them, it is clear that any audience member could relate to or connect with something being described on stage. Although maybe not losing a glass slipper or learning how to fly a magic carpet…