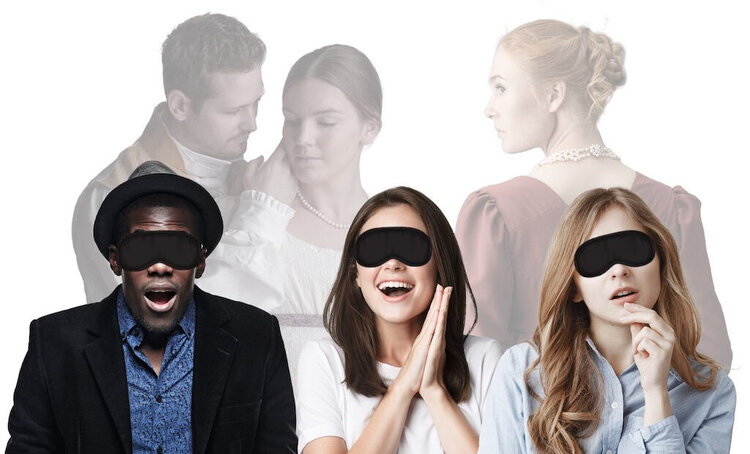 Mission accepted. A small group gathers online – our task: to test the security of a museum by breaking into it to steal one of the fabulous lost Faberge eggs of the Romanov Empire for the owner before the evil ‘Easter Bunny’ beats us to it.

But ‘Eggstraction’ is an immersive experience with a twist – all the participants are blindfolded throughout the entire online show. Say hello to your imagination!

Our first task was to come up with a group name and that responsibility fell to my little niece Tara. And so, thanks to her, we became the Devilish Detectives and we really were true to our name.

Next, each player had to pick one item from a list of around three things they were offered. It could be a hammer, infrared glasses, a carrot and even a rubber chicken. Yep, even the rubber chicken has a role to play if it is picked.

And we were off. Morpheus, which is also the name of the theatre company which has come up with this genius show, was our guide. In real life, this was Dominic McChesney who actually wrote the script. But it’s not just a simple script, it’s specially tailored depending on the items that are picked, so no two shows are actually the same.

He narrated the scenes and talked us through all the various scenarios we faced. He described so well what was around us. The rest was down to us to picture in our minds and come up with clever ways to find and free the egg for the eccentric billionaire Frederick Hampton from the secure control room in the basement of the museum.

The whole thing was just so well thought out because it makes you feel like you are in an escape room but without the power of your sight.

And it’s not just the spoken word. This show is brought alive with clever sound effects and eggstra (geddit?) clues like voice recordings which add to the authenticity of it all. And obviously, you get to use the items you’ve picked – Tara chose binoculars, I chose the infrared glasses, and others included wire clippers, a carrot and a scalpel.

It’s a family-friendly show and if you want you can even make a bespoke booking for your own group. Also, you don’t have to have a child to take part, it’s just as much for adults as it is for younger children.

‘Eggstraction’ is cleverly put together and gives you the nostalgia of feeling like you are an in immersive theatre show while still being in the comfort of your own home.

We had a great time, crunching our way through a bag of popcorn while coming up with some novel ways of trying to get to the all-important Faberge egg.

Tara loved it because while her new normal has become doing everything online, this actually had nothing to do with screen time. She really enjoyed recreating the museum in her mind and letting her imagination do the work and it paid off because she actually came up with a few really good ideas that helped guide the group along the way.

This is a great way of spending time with your little ones during Easter and just being able to do something a little bit different by creating a virtual world for yourself.

When I took off my mask and happened to glance at the time, I couldn’t believe we had been online for almost two hours. The time had just vanished but it was such a great way of spending two hours.

And another tick for this show is that you throw yourself into the narrative and it’s all about your imagination. You get out what you put in. Tara’s advice is simple: Let yourself go.

And you’ll be pleased to hear that the Devilish Detectives were successful in our mission and Mr Hampton was a very happy man to be reunited with his fantastic Faberge egg.

This has a double thumbs up from Tara and me. If you’re itching to find new ways of breaking the boredom this is a fantastic activity that will still have you talking about it for days.

Eggstraction is playing online until 25 April 2021. For more information and tickets, click here