A reworking of Sondheim's classic at the Gielgud 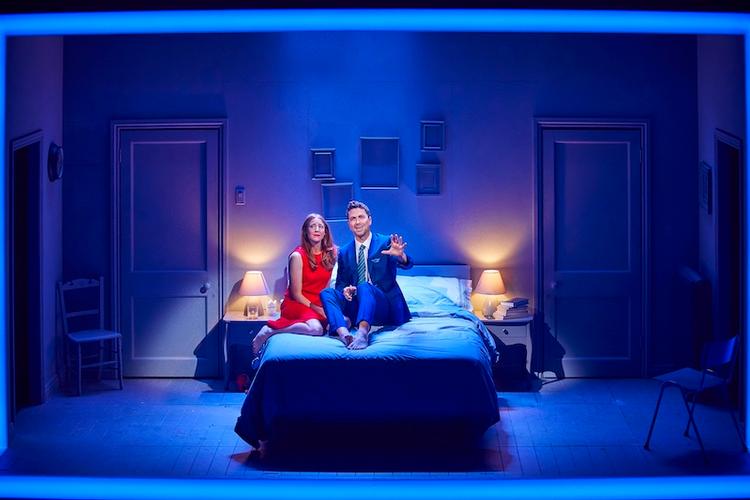 Company is a 1970 musical comedy with music and lyrics by Stephen Sondheim and book by George Furth. It features some of Sondheim's most memorable songs, including Getting Married Today, Marry Me a Little and Being Alive.  Director Marianne Elliott’s fresh look brings the show right into the 21st century.

At her 35th birthday party, all Bobby’s (Rosalie Craig) friends wonder why she isn’t married. Why is it she can’t seem to find the right man, settle down, and start a family?

The show brings Bobby into different scenes, each one finds her dealing with a different couple of friends: the neurotic Harry and Sarah (with an alcohol and food problem respectively); Peter and Susan who are about to separate and then find out that the divorce and living together will give them the freedom to love one another more than the marriage; Jamie and Paul, who are about to get married, but Jamie is terrified and just wants to run away; Jenny and David, who think that getting high on pot will add spice to their lives, and finally  the sarcastic and sophisticate Joanne and Larry, her latest husband.

Now, in terms of productions, that could be summarized in the word perfection. Craig, Lupone and the rest of the cast are superb, as it is the set, with such a clever and beautiful use of the stage.

The problem of the show is the book itself. The scenes are vignettes, but unlike pieces of a puzzle, they are never strung together in any meaningful way.

Everyone keeps telling us how charismatic Bobby she is, but there is no evidence to support it. Who is she? What is her background? What does she want? There is really little we know about her (we don’t even know her job) and she seems to just go with the flow. There is no character growth.

Some of her friends are caricatures and some scenes resemble a farce. The most successful is the one between Jamie and Paul: frenetic, intense and hilarious.

The fact that Company is plotless or just disorganized could be something people like, but it is also a weakness.

Sondheim is a genius who transformed Broadway in many ways and his songs are classics. But, I also think that his stories let him down.

If you are a big fan of him, then this production of Company is a must. If not, take a big breath, and enjoy…