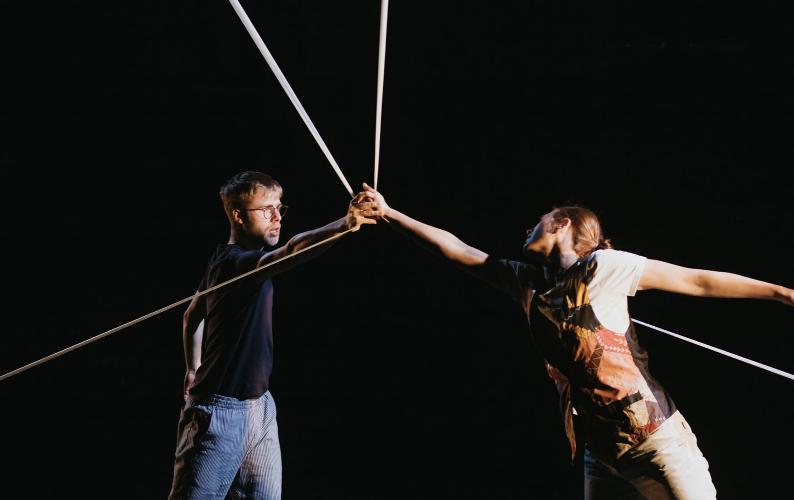 Another of Mike Bartlett’s classics, An Intervention, is brought to our screens by Arts at The Old Fire Station. A filmed rehearsal reading of this play shows how a minimal cast (2 actors) does not mean minimal content. Bartlett’s script and Clare Lizzimore’s direction is the epitome of less is more. The authentic script along with the effortless direction pairs up perfectly for the characters of A and B to explore the frustrations and fuss of friendship.

B is quick and witty; A is sensitive and confrontational. Charly Clive and Ellen Robertson bring energy and commitment to the performance. Though we’re often told as actors that sitting is ‘limiting’, this is quickly dispelled from Lizzimore’s directing, focusing on what is at the heart of this play, the text. The seated performance is broken up occasionally with aside monologues, allowing the audience fleeting moments of connection, outside of the fast-paced, back and forth structure of the show that is necessary. The naturalistic style of dialogue is and will always be the charm of Bartlett’s work and is presented truthfully by Clive and Robertson, especially in the moments where the mention of the character Hannah, brings bitterness into their friendship.

Drops of opposing political views seem like they might frame A and B’s conflict, but in reality, their colliding views on life come closer to home. Their opinions to approaching and being involved in warfare only echo their later conversations, commenting on each other's personal lives of toxic relationships and alcohol addiction. Both actors present depth to A and B in their characterisation, though on the surface they bicker and poke at each other, they give one another their time and presence long enough to reveal levels of care and love.

This showing of An Intervention is short and sweet, running at just under an hour, but gives the audience plenty of opportunities to get hooked and appreciate the depth of dialogue and human interaction presented.