Any Simon and Garfunkel lovers? 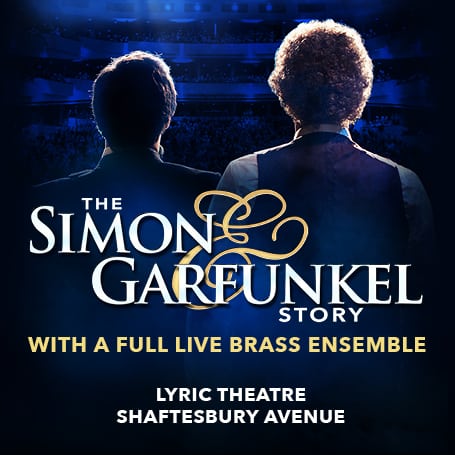 The lively folk music and poetic lyrics of Simon and Garfunkel are on tour, with monthly stops at the heart of the London West End, currently at the Lyric Theatre. The Simon and Garfunkel story is a joyous tribute to the legendary duo and well performed re-enactment of the artists’ songs.

After opening with the classic The Sound of Silence, the show recounts the very beginning of the legend: when Paul Simon and Art Garfunkel met at the high school, their love for the Everly Brothers, those first record under the initial band name Tom & Jerry. Passing through the successful debut album in 1964 Wednesday Morning, 3 A.M., the show offers some less often heard singles, like ‘I am a rock’, as well as the duo’s works in progress and experimentations towards their distinctive style, as in the psychedelic-influenced ‘Patterns’.

The second part of the production starts with another great hit: ‘Mrs Robinson’. The lights, throughout the show, recreates the shadows and colourful rays of gigs and open acts. Thus, when it comes the moment of ‘Old friends’, the mood easily turns melancholic with the aid of the penumbra.

The brass ensemble is introduced for the masterpiece of the duo, Bridge over troubled waters, which will declare the two as the unquestionable music stars of the 70s. But precisely during those years, Simon and Garfunkel took the sad decision to split, as their life paths didn’t seem reconcilable anymore. The story wouldn’t have be completed without mentioning the epic final concert in Central Park, New York, in 1981, one of the most attended in the city’s history. And truly as a music event, the show ends with a couple of songs in reprise, to the request of the audience.

Photographs of the artists, alternated with stills and footage contemporary to the time of the narration, are projected on the background. Marilyn Monroe, Che Guevara, Vietnamese children soldiers, the protagonists of the summer of love, the Pink Panther: historical clips, back to back with more familiar faces from the pop culture, are screened, helping the audience to recall the features and the atmosphere of the moment. Many songs are introduced by key information, like the Grammy Awards beating ‘Hey Jude’ and the platinum album of the 1968.

Charles Blyth, as Art Garfunkel, and Sam O'Hanlon, as Paul Simon, are absolutely brilliant. Both talented performers, Blyth shines for his deep voice and the smooth whistle solo, while O’Hanlon successfully engages with the audience and masterly plays the guitar.

The setlist inducing the crescendo in the rock and the funk elements of the duo’s production make a perfectly balanced revival concert. As for the theatre setting, more narrative and a deeper threading between the visual and the music would have benefitted the whole. General culture facts are scattered here and there as the interconnecting theme, but nothing more than a simple biographical line. Anyone not really familiar with the story, would still enjoy the night, but well less than Simon & Garfunkel amateurs and learning not much extra.

The mixture of audience’s participation and the talented musicians on stage make this a bright festive production.

The Simon & Garfunkel story is at the Lyric Theatre and at the Vaudeville Theatre until Monday 10th December.