The premiere of a new British musical 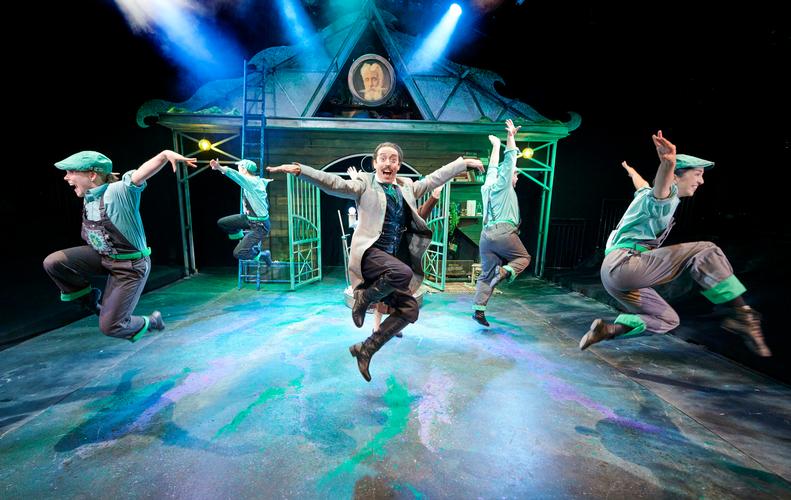 The Sorcerer’s Apprentice, by Richard Hough and Ben Morales Frost, is a brand new British musical that follows the extraordinary world of a sorcerer and his rebellious daughter. Set against the backdrop of the stunning Northern Lights, father and daughter must work together to save the small town, Midgard, from ruin. In line with current restrictions, this production was filmed live at the Southwark Playhouse and is available to stream online making this premiere the perfect family-friendly entertainment to indulge in from the comfort of your own home.

The concept for this production is very clever, mixing genres to make a show which will gain interest from a wide range of people and ages. While the show at times lacks originality, the scene from Disney's Fantasia springs to mind, overall The Sorcerer's Apprentice is a heart-warming coming of age story about family and love, with a little magic thrown in for good measure. The show's cast, led by the brilliant David Thaxton and introducing newcomer Mary Moore, work hard throughout the show and manage to incorporate slick set changes, magical trickery and puppetry to make a great family-friendly musical. Marc Pickering plays the sometimes over-the-top 'baddie' Fabian Lyddeker with good humour. The only downfall of the show being recorded is that the actors cannot feed off from the audience and the comedic roles and funny one-liners can get lost. Likewise whilst the puppetry, by Scarlet Wilderink, is brilliant and very creative through the screen it does not have the same wow effect. Hopefully given time, the show will continue to evolve and be able to be performed in front of a live audience as no doubt seeing the magic occur onstage would add a whole new dynamic.

The score, by Ben Morales Frost, is catchy at times and the reprisals work well to keep the show moving. 'Invisible', 'Echoes in the Dark', 'Let There Be Light' and 'Magic in the Air' stand out for their clever lyrics and melodies. Whilst it may not have any showstopper moments The Sorcerer's Apprentice doesn't need them. It doesn't rely on intricate riffs, or high belting to tell the story. The songs work well to move the story forward and are enjoyable throughout.

The set, designed by Anna Kelsey, along with the superb lighting by Clancy Flynn adds further to create the magical, mystical environment. The costumes don't give away what time period the show is set in so it is up to the audience to decide and with some modern references from the main character Eva, it could be that the show is set in the present or even future. The scenery is detailed, to give each setting character and purpose and the set changes are slick and do not detract from the show. It is good to see that despite being a recording that these set changes have been kept in the final stream, and the 2-minute bell during the interval adds that little touch for those avid theatre-goers.

The Sorcerer's Apprentice is a lovely, family-friendly musical. A great chance to introduce younger members of the family to theatre whilst in the comfort of your own home. Despite being about magic, the show has strong links to family, independence, young love and of course, in a novel way, it attempts to tackle the current issue of climate change and the use of fossil fuels. So why not swap Netflix for something new and original this March?