A dance and music theatre show, weaving through the cultural significance of eating 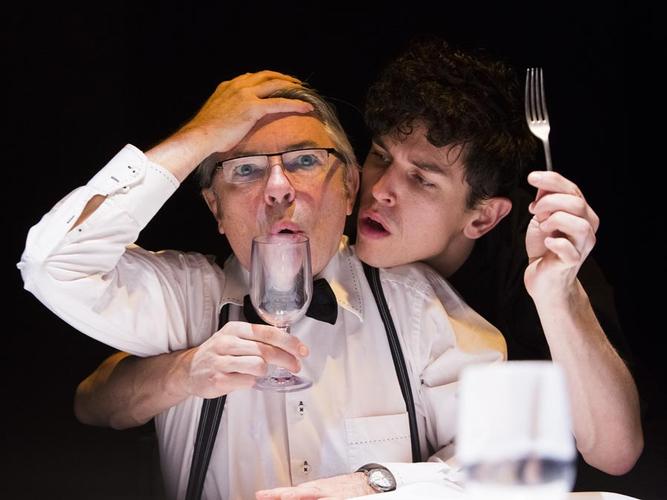 It was only a few months ago the nation was participating in the government’s scheme, Eat Out To Help Out, and even less time when the uproar was caused by the government's refusal to provide free meals for school children. May Contain Food provides the manifestation for the politics of food, (This comment would feel empty without mentioning the article Food is and always will be political by Camilla Makhmudi), addressing produce, vegetarianism and eating disorders in a whirlwind of high-quality dance and song. Without deeper consideration, this piece of performance could pass you by, but it shouldn’t. Food politics are ingested literally and metaphorically into our everyday lives and choosing what we eat, when we eat and how we eat will always be relevant.

Luca Silvestrini and Orlando Gough create an exploration of movement and voice with the leading theme of food that perfectly satisfies the stomach and mind. They invite us to follow along with their simple tasting menu, which is the finishing touch to the show. Though at times the score can feel like a drama audition warm-up, it is none the less playful and dynamic, as both the singing and dance were performed perfectly by the cast. A particularly successful moment was the scene that used the line, ‘don’t eat that, eat this’, which is stirring around my mind hours after the show. These few words gave personification to a potential eating disorder and created an overwhelming, creepy and climatic atmosphere.

Perhaps aimed at the more unconventional theatre seekers, especially theatre students, this show displays how to implement an underrepresented politic with innovative expression. See this performance if you can get on-board with an interpretive exploration, with no leading structure or narrative, but nonetheless executed and you will give it the applause it deserves.