A lot of drama in this classroom... 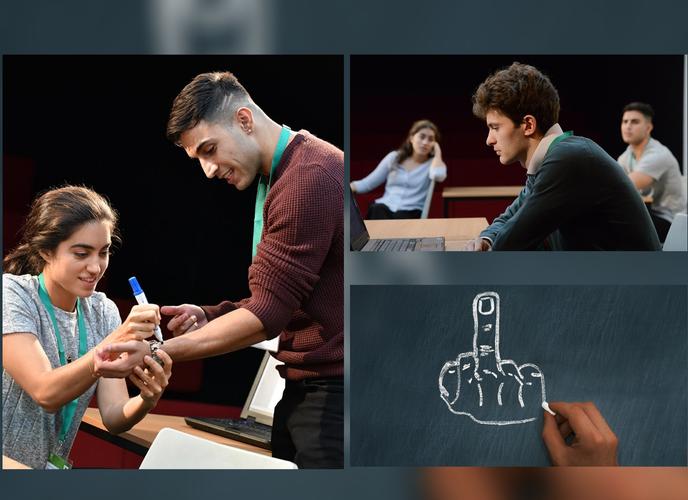 Every day I make greatness happen is a new play written by Richard Molloy and directed by Alice Hamilton that gives an insight into secondary school life through the stories of Iman (Josh Zare'), Kareem (Moe Bar-El), Alisha (Sofia Barclay) and their teacher Miss Murphy (Susan Stanley). The three students failed GCSE English and there are only six weeks until their results. This is their last chance to continue Sixth Form.

While Kareem bullies Iman, Alisha moves her interest from one guy to the other and this will have repercussions for all the three students.

The set of the whole play is a classroom that is falling apart, with the ceiling falling down and water pouring in. Is this how the school system care for the kids? And, actually, does the British education system care about them at all?

Every day I make great happiness is a truly funny and engaging show, with plenty of laughs. The script is clever, the direction tight and the performance of the cast superb.

Susan Stainley is perfect as Miss Murphy, who tries to hold together the pieces of the class and of her life. Sofia Barclay is a rebel teenager and Moe Bar-El has a great stage presence and a captivating body language as the  bully Kareem.

Congratulations to Josh Zare', at his professional debut, who plays so convincingly Iman, a student with learning difficulties.

It is easy to empathize with all the characters, in different ways and for different reasons.

The political message of the play – about the flaws of the education system – is not very incisive.  Similarly, the dynamics between the four characters and topics like bullying are not fully explored and explained and this results in a lack of depth of the narration.

Still, Every day I make great happiness is a fast paced, entertaining and engaging show with excellent performances that will hopefully bring younger audiences to the theatre.

Every day I make greatness happen is running until 20 October