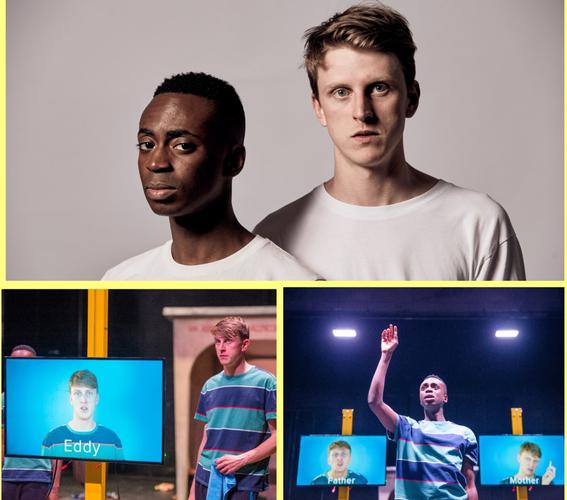 The end of Eddy is a new stage adaptation of Édouard Louis’s internationally acclaimed autobiographical novel.

Born into poverty in an isolated village in rural France called Hallencourt, Eddy grows up amongst hard men and women living violent and unemotional lives. Repeatedly bullied for being gay in the corridor of his school (and then outside too), he tries to understand who he is and who he might become.

The narration is told by the two actors, Alex Austin and Kwaku Mills, who share the role of Eddy, and also play all the other characters and other parts, helped by four screenings (that can be raised and lowered) located on the stage. Both of them are brilliant and versatile, and the acting is engaging and convincing.

It is easy to forget how the mix of poverty, alcohol abuse, physical violence and social difficulties can be toxic and can damage emotionally the children. But the message of this play is a message of hope, about outstripping the personal difficult circumstances to become a better person.

Even if the book tells a familiar and not particularly original story, “The end of Eddy” is a piece of theatre about pain, self-discovery and liberation that still needs to be seen and heard, especially by the younger generations.