A captivating thriller at the Tristan Bates Theatre 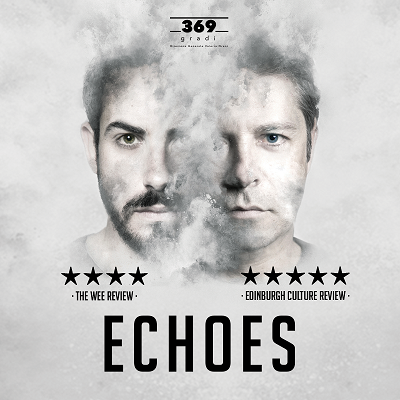 Two men meet in a room. One (Marco Quaglia) has started a war dropping a bomb that killed more than one million people. The other one (Stefano Patti) is a journalist who tries to understand why the maniac wants to destroy the humanity. Is it really because the fanatic thinks that there are too many people in this world and there are not enough spaces and resources to sustain the growth of the population?  Or is there something else? Maybe another reason, more personal and emotional?

Echoes is a tense psychological sci-fi thriller, a game of power between two different persons with a growing tension that leads to an unexpected twist at the end. The show is so captivating also because of the class A acting of Marco and Stefano, and of the brilliant lighting (Paride Donatelli) that enhances the tension, taking it to another level.

The audience is gripped for 50 minutes - the right length for such unsettling play-, feeling really like inside an underground bunker and trying to guess the positions of the characters and their real motivations.  Highly recommended.

Echoes is at the Tristan Bates Theatre until 8 September