The concert is streamed into your living rooms across the globe 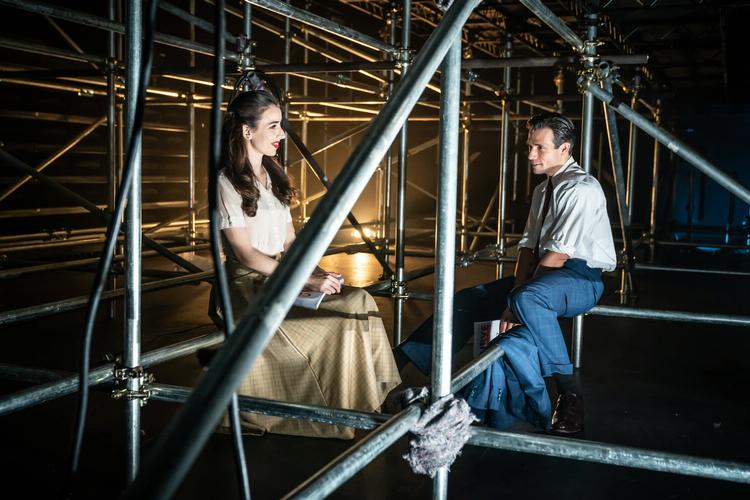 2020 has been the year that no one was expecting, the year that had thrown one thing after another at us all and the year that has brought the theatre industry to its knees. But nevertheless, the industry has continued to fight back and continued to say, I get knocked down, but I get up again. Subject to higher levels of restrictions for a great portion of the year, The Curve, Leicester, has had countless hoops to leap through and countless obstacles to face in attempt to bring anything to the stage, but that hasn’t stopped them from doing so. They may not have been able to present ‘Sunset Boulevard’ in the way that they were originally intending, but they have still made an undeniable triumph of a production by moving a newly adapted ‘concert’ version online.

Andrew Lloyd Webber, Don Black and Christopher Hampton’s ‘Sunset Boulevard’ tells the story of Norma Desmond (played here by Ria Jones), a faded Hollywood Star who failed to make the move to the ‘talkies’, living in her once-grand mansion with no one for company but her devoted butler Max (Adam Pearce). When Joe Gillis (Danny Mac), a down on his luck scriptwriter stumbles upon her run-down home whilst hiding from debt collectors, she sees him as her way back to stardom and he finds himself living in her world where she sees herself as the ‘greatest star’ and sees him as her kept man working on a script, she wrote depicting herself as the teenage lead. He tries to keep things under control, keeping Norma happy whilst working on his script with pretty young editor Better (Molly Lynch), but once the great Norma Desmond has her mind set on making a Hollywood comeback, nothing is ever that simple.

The Curve Leicester, having fully hoped to be able to stage this production to live socially distanced audiences before tier restrictions put a stopper to these plans, has had a massive redesign, reconfiguring the auditorium to allow for performances in the round with seats distanced out around a rotating stage. But whilst there may not have been any audience allowed in, this newly redesigned performance space has enabled the team at the Curve to create this highly cinematic piece of theatre, with every piece of the space used including what would normally be backstage areas, walkways and scaffolds, creating an entire world in the auditorium. There may not have been any set as such, but the simple act of moving around the space created the world of Sunset Boulevard as we are taken through the back lots of Paramount Pictures, into Norma’s dishevelled mansion, into restaurants and along beaches, it is brilliantly done.

Ria Jones shines in the role of Norma Desmond, with a commanding stage presence and powerful vocals that raise the roof. It’s a complex character, with many layers and habits that make her not the easiest of characters to like and feel for. She’s eccentric, larger than life and controlling but Jones makes her compelling and is able to switch between the softer, more vulnerable side of the character and the overbearing, strange and at times sinister side with ease. Danny Mac showcases incredible skill as Joe Gillis, the script writer that finds himself under Norma’s control, both narrating the piece and taking a leading role within it. Whilst his vocals are top class, it is his acting that truly steals the spotlight here. Joe is a driven, determined character, sure of what he wants to achieve whilst remaining unsure of how to actually achieve it. He sees both Betty and Norma as possible tickets back to script writing glory but becomes torn over which is the best path to take. He knows he has to keep Norma on his good side, whilst his feelings for Betty and his enjoyment of working with her cause’s rifts with Norma. It’s easy to feel for Joe and become drawn into the complicated ins and outs of his story.

Molly Lynch plays Betty, a young script editor who is both kind and wickedly clever. She sees the potential in Joe’s scripts and wants nothing more than to help him with his work, but through a budding friendship with him, she too becomes drawn into the strange almost fictional world of Norma Desmond. Lynch, who impressed last year with her appearances in Light in the Piazza’ and ‘The Last Five Years’ throughout this year, is certainly a young star on the rise and I look forward to seeing what is next for her. Adam Pearce is a powerful force as Max, Norma’s highly devoted butler and companion, always one step ahead of the game being played at the studios and one step ahead of any of Joe’s plans. Pearce’s vocals are simply incredible, and his stage presence is a force to be reckoned with.

The ensemble plays multiple roles throughout, adding a wonderful dose of movement and energy to the piece. Even though they are calling this production a concert version, there is plenty of movement and dancing that makes it feel a lot more than a concert. The camera work by Crosscut Media deserves praising, with a brilliant use of editing which layers footage and photographs over the action adding to the storytelling. This production is a prime example of how theatre has adapted to this strange hard year and bridges the gap between stage and screen. It feels extremely cinematic and wouldn’t look out of place on a cinema screen.

The Curve, Leicester’s production of ‘Sunset Boulevard’ takes the streaming of live theatre to a new level, not only with its music and storytelling, all performed by a wonderful cast, but also in the way in which it showcases the skill and talent of the entire team both on and off the stage. It shows the Curve in all its glory and shows the world just what it is missing when it comes to live theatre.