The Broadway musical from the famous Disney's movie 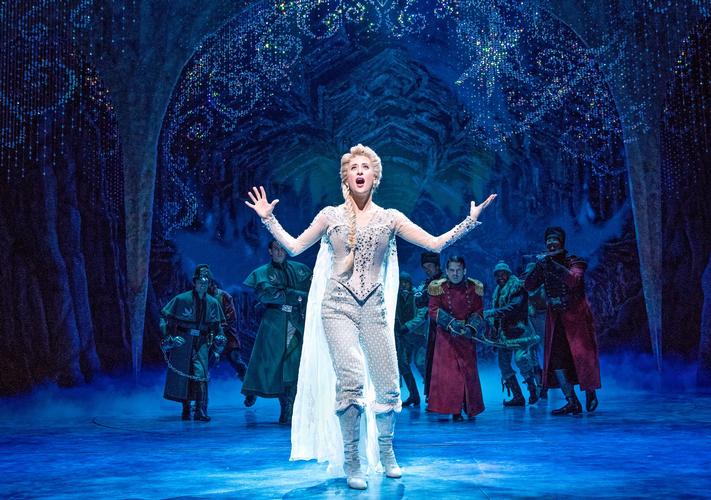 I admit I was sceptical. I’d heard good things, but I doubted it would work. And, despite all that, I was very surprised how much I enjoyed the magic of Frozen on Broadway.

The vast majority of this planet know the story of Frozen but, just in case you don’t, I’ll put a description of the plot at the end rather than the beginning.

If you’re expecting anything more than the film, you’ll be disappointed. There are new songs, which are nothing that memorable, but the story is pretty much identical. The feminist theme throughout is, of course, something we all admired in Disney when the film first premiered – the “act of true love” didn’t come from a romantic other-half, but from a sibling.

Both young Elsa (Ayla Schwartz) and Anna (Mattea Conforti) were brilliant. Having such a high level of stage presence at such a young age is a gift. They carried the first section of the show so well.

The performance I saw had covers for both older Elsa and older Anna, just in case you’re slightly unfamiliar with their names. Aisha Jackson as older Anna embodies everything everyone loves about the character. She is playful, feisty and has an absolutely stunning voice. Honestly, her performance is pretty flawless! Jelani Alladin as Kristoff is again, a perfect casting. He is so charming and charismatic to watch on stage that any lost princess would end up falling for him. As a pair, Aisha and Jelani have such chemistry, they really are a match made in stage heaven.

You’re less impressed, unfortunately, by Alyssa Fox who plays older Elsa. Yes, you have to have a brilliant voice to play Elsa, but her acting and commitment to the role isn’t on the same level as Jackson. She feels slightly distant.

Greg Hildreth plays the adorable warm hug-loving snowman, Olaf. The reaction when he made his entrance was priceless – the whole audience cheered. He’s such a beautiful, innocent character, and his rendition of “Summer” was effortless.

The musical does change the idea of the “Hidden Folk of the Mountains”. In the film, the trolls feel ditsy and innocent. In the musical, they’re much more like tribal, avatar style creatures. They bring a feeling of mystery to the show lead by Timothy Hughes who is just beautiful, even with hairy legs and a tail. Their presence changes the dynamic of the musical, which otherwise does tend to feel very ‘Disney’.

As a major Disney fan, I had a blast watching this show. The design, when it comes to both lighting (Natasha Katz) and special effects (Jeremy Chernick), is simply magical. When Elsa sends sparkles and ice around the stage it’s captivating. I was as mesmerised as every child in that auditorium. Some of the setting transitions are slightly ‘clunky’, however, and at times, it breaks the illusion. That being said, the set design by Christopher Oram is phenomenal. Costumes, also by Oram, bring a mixture between more legit musical theatre within the ensemble, and contemporary musical theatre of Elsa and her iconic sparkly dress.

Some of the story does feel slightly forced, especially the opening of the second act, “Hygge”, which ends in all the members of sauna performing a naked kick-line?! And the show lacks the suspense of the film, which takes away the sense of urgency within the narrative.

But anyone who loves Disney will LOVE the show. It brings the film and the princesses to life. But, don’t expect a quiet auditorium… you just have to try to see the children’s very vocal reactions as endearing, and not annoying.

Here’s a summary of the complicated and intricate plot for those of you who don’t know it (I highly recommend a purchase of the film).

We meet the young princess duo, Elsa (who has magical icy powers) and Anna. Elsa accidently strikes Anna and knocks her unconscious but, though the hidden folk of the forest can heal her, they have to wipe her memory of all knowledge of Elsa’s magic.

Elsa keeps her magic powers secret and succeeds to the throne when her parents pass away (or so we think… look up the theory about Tarzan and Frozen if you haven’t, it’ll blow your mind).

Anna dreams of meeting her prince and, right on cue, meets Prince Hans of the Southern Isles and falls instantly in love. Elsa denies them her blessing for marriage with the iconic un-Disney-esque line, “you can’t marry someone you just met?!”.

In a state of high anxiety, Elsa unleashes her powers in front of the crowd and flees the city after being branded a monster.

Anna goes to find her and, on the journey, meets Kristoff, Sven (the reindeer), and Olaf (the adorable warm hug-loving snowman). They journey to Elsa’s new ice palace but, again by accident, Elsa unleashes her magic on Anna and, this time, it’s Anna’s heart that gets cursed. The hidden folk explain that the only way to cure a frozen heart is with an “act of true love”.

Now this sound like a job for Hans but he breaks the news that he was only ever pretending to be in love with Anna! Anna is distraught but, in her final moments, saves Elsa from being killed by Hans (I told you it was complicated!) before the curse on her heart turns her into an ice statue.

Elsa mourns over her sister, who thaws due to this “act of true love” they were waiting for. Hans is banished and everyone else, in true Disney style, lives happily ever after.