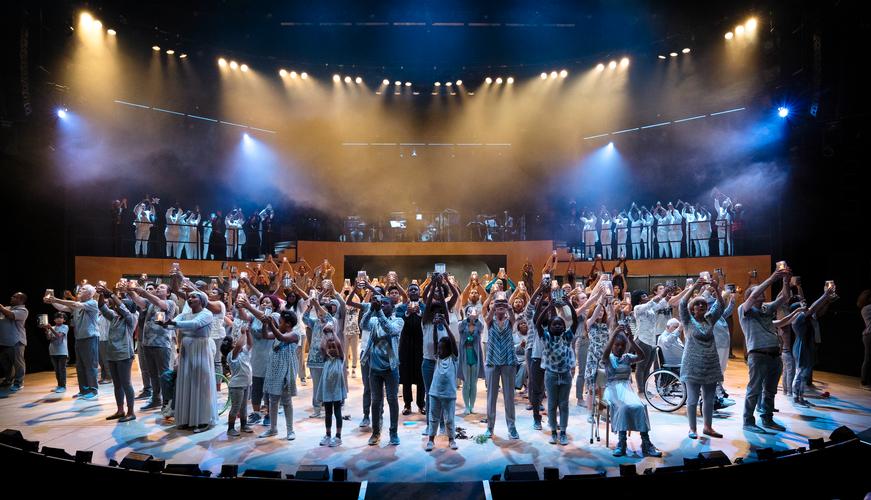 It is difficult to imagine a theatre performance that would answer better to the definition of a community project than the Pericles at the National Theatre.

Chris Bush’s adaptation of Shakespeare’s play gets an engaging remake in the vision of director Emily Lim and the eight organizations taking part in the huge nationwide initiative of Public Acts, premiering this Bank Holiday weekend in London. At the center of a two-year adventure, the community partners, the Queen’s Theatre, Hornchurch, and the National Theatre come together to put on stage a wonderful version of a not-so-known work of the Bard, with the participation of two hundred people. A truly vibrant society is represented, without boundaries of gender, disability, color, faith. This production is a delight for the eyes and an uplifting work, proving the wonders possible when inclusiveness and creativity walk hand in hand.

Pericles, prince of Tyre, must leave his land, as a threaten from another kingdom is after him. First, he arrives in the hungered Tarsus, where, despite his generosity, he is sent away. The prince soon tastes the woes of the sea, as he is shipwrecked on the flourishing ground of Pentapolis. Here he finds the love of his life, Thaisa, the beautiful daughter of the Queen. The family grows, but a tragedy awaits for the prince and his pregnant wife, as they set to return to Tyre.

It cannot go unnoticed the great command and good stage presence of this large cast. The many people not only well interpret the crowd of the four settings, but they are set to effectively render natural elements otherwise left to the audience's imagination, like the growing sea waves. The coordination among the members is key, as many, for the majority of the time, populate the scenes.

The play takes its time to reach an engaging rhythm. However, as it moves towards the second part, it is clear the wanted crescendo in the story. When the show seems set in a calm tone, the pirates, led by the energetic Gemma Vilanou, arrive and very lively sequences follow. The mastery of the costume department reaches high levels of appreciation, especially in Mytilene, where everyone dresses sparkling and luxurious outfits, suiting the various personalities.

The brilliantly buoyant performance of Kevin Harvey as Boult is unmissable and perfectly sits in the developments of the events: he brings a dash of zestful extravaganza. Despite the swaggering manners quite stereotyped of the beginning, Ashley Zhangazha reveals an impressive voice and a unique talent, making him an excellent Pericles.

The music by Jim Fortune features a good variety of genres, moving from soul to upbeat tunes, pleasantly accompanying the different movements of the performance. The power of the chanting is superb and gives a distinctive strength to the whole.

This first production of Public Acts is even more commendable for the choice of a version that focuses on being a foreigner, human empathy and shared value. The messages are not blatantly put forward, as for preaching the right social behaviour, rather they are scattered and put into music, in a natural flow, leaving the theatergoers thinking at their leisure.

A negative note, unfortunately, goes to the National Theatre, as on the opening night a technical issue arose midway through the performance, which stopped the show for ten minutes, breaking the pace. Not that incidents could always be foreseen, but a similar problem came very unexpected from the National.

Nonetheless, Pericles proves to be a wonderfully fresh production. The wish left behind is to see more by Public Acts, and more dazzling projects like this.

Pericles is at the National Theatre until Tuesday 28th August.