Our review just after the celebration of the 15th anniversary, 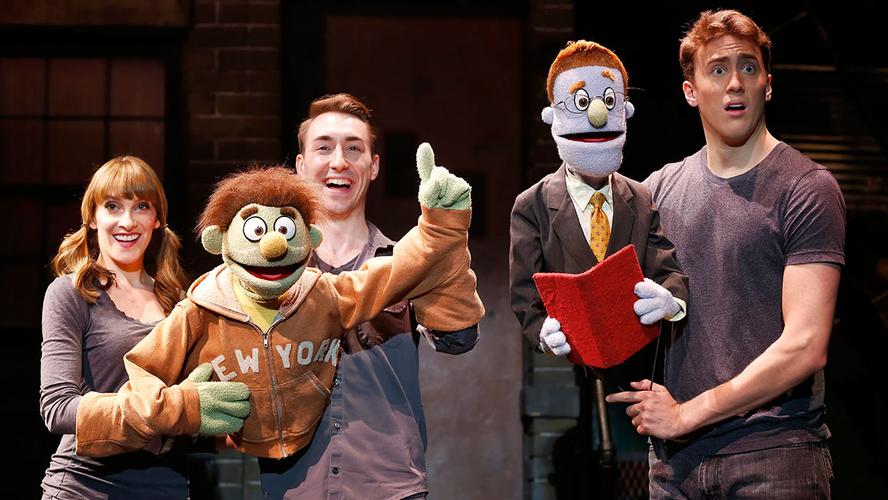 Avenue Q is an iconic show that opened in 2003 on Broadway, and is now in its 9th year at New World Stages, an off-broadway Theatre containing 5 performance spaces.

For anyone who is familiar with Sesame Street, similarities will be obvious. However, instead of watching the side screens to understand our number bonds to ten, we find ourselves watching video explanations about 'one night stands' and proposals.

The cast are made up of a mixture of puppets and people. We meet Princeton (we had a cover, Matt Gangler), a new English graduate trying to make his way as an adult. He wants to find an affordable apartment in New York City, so, as many New Yorkers can relate to, ends up travelling all the way down the Avenue alphabet from A to Q to find it.

Each is going through their own struggles which in one way or another, we can all relate to. Whether it be financial struggles, romantic struggles, or the long term struggle of working out your purpose in life.

We follow Princeton and the motley crew of Avenue Q to discover what's really important to each of them. Nicki has told Rod that he would be friends with him no matter his sexuality, but Rod is too scared to admit his real feelings. Christmas Eve is desperate for Brian to get a real job and to stop being so lazy and all Kate longs for is to open a school specifically for monsters. This show is the perfect combination of community – people from all backgrounds coming together to create better situations for others.

It's a really important show for many reasons. The use of puppets, oddly enough, allow some important yet tricky topics to be discussed, such as racism and sexuality. The genius, comedic writing by Robert Lopez (also Book of Mormon) and Jeff Marx is so catchy, but you have to be very careful what songs you leave the theatre singing; some of them are best left inside the auditorium. They continue to update the songs as times change within politics and society which allows the show to still resonate with audiences over 13 years later.

The skill of the cast is undeniable. Of course, they have amazing puppetry skills, but they also have such an ability to switch puppet characters using their voices. Each character has such a distinctive sound and the way they transform both their speaking and singing voices to match each puppet's personality is amazing. For anyone who has studied a singing technique such as Estille, you'll understand that adding twang and applying tasteful constriction can transform your voice and character.

Although this show is definitely not suitable for kids, with its puppet nudity and explicit language, it's something I recommend for any adult who is after some relatable comedy. It's an uplifting, feel good, hilarious musical.