A heart-warming story about shared nostalgia and missed opportunities 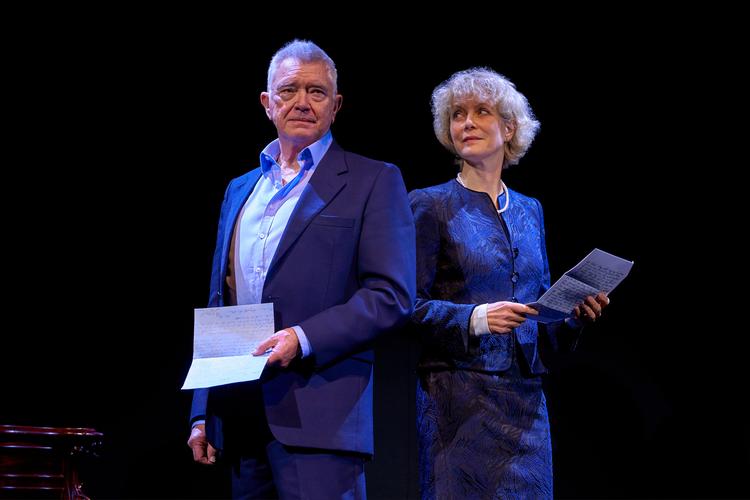 Coming out of another lockdown, a trip to the theatre for many is still something that’s seen with slight trepidation. Put the scepticism and worry aside and take a trip to the theatres: there’s still a selection of gems on show, including ‘Love Letters’. Starring stage and screen icons Martin Shaw and Jenny Seagrove in a charming and complex story of a relationship, that’s spanned for years, all through the penning of words to paper in the form of letters.

We witness the beginning of a relationship between Andrew Makepeace Ladd III and Melissa Gardner and the chase that unravels as the story unfolds. Starting as children and all the way through to middle age, we journey through the various ups and downs of life shared between one another.

Two almost identical bureaus, with spotlights on both actors, highlights the simplistic way we can analyse their relationship, from only their letters alone. Shaw and Seagrove react to each other's words consistently throughout to portray the pairs blossoming friendship and consequently, the complicated relationship that follows.

The constant missing of affection highlights the effect of technology and the lost art of writing. As Melissa begins to grow agitated and tired of waiting for the letters to arrive from Andy, he too becomes stubborn, refusing to follow the times and to change to the telephone. This amplifies Melissa's eventual rebellious behaviour against Andy’s need to conform to a safer lifestyle engrained by his parents.

Both actors' depiction of their youth is endearing and captivating as the audience become hopeful of a potential happy ending. Seagrove gives an excellent insight into the mental demise towards the end, only strengthened by her vulnerable reactions to Andy’s decisions. Although their performances were believable and engaging, it felt somewhat static due to lack of movement as the pair stay sat throughout the play. Noticing also that the pair both read off scripts slightly removed the audience from the moments that allowed you to fully immerse yourself in their entanglement.

This being said, it’s a precious insight into life before technology was at the forefront of communication. It shows a real bond that unravels throughout their letters which is heartwarming for all audiences who love the chase that comes with love.