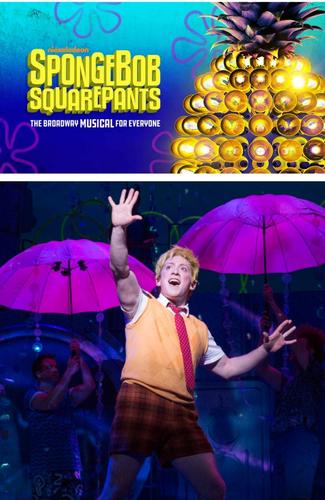 Growing up, I probably watched a grand total of 4 episodes of Spongebob. Sue me! It was just never really my thing. If I was a Spongebob addict, or spent my childhood years watching the show religiously, I probably would have seen the musical in a different light  but it would be no surprise to say I walked away from Spongebob without having gained any brain cells, or learned anything about the people that make this world great. Nevertheless, I was reminded that even those who may seem like simple sponges can make the seabed a much better place.

In this show, Spongebob and the community of Bikini Bottom, including Squids, Crabs, Squirrels (best not to question that one) and other sea creatures are threatened by the potential eruption of a volcano. Sandy Cheeks (Christina Sajous), Patrick (Danny Skinner) and himself have therefore to work out a way to save everyone whilst being targeted by evil Sheldon Plankton (Wesley Taylor) and his wife, Karen the Computer (Catherine Ricafort) amongst other troubles.

The casting of this show is pretty flawless, with Ethan Slater being the literal human version of the Sponge. Honestly, every review said he was as close to the real thing as you can get, but until you see it for yourself, it’s hard to believe.  His speaking and singing voice, his presence, and the way he interweaves himself between ladders is impressive to say the least. You don’t, for one second throughout the show, think that he may not actually be the real Spongebob.

From my very limited memory of the TV show, I seem to remember hating Squidward for always being so grumpy, but you end up feeling a huge sympathy for him during the musical. His big tap number is probably the most memorable of them all, and the way Gavin Lee has mastered his extra legs makes you forget which ones really belong to him.

The costumes and the staging are brilliant. It’s somehow a strange mix of an 80’s music video and an old sci-fi film about future robots, with giant swimming pool floats made into coral and bouncy balls being used as boulders from the ever-angrier volvano. And even for someone less familiar with the TV show, such as myself, the design aspects are visibly familiar and the use of a very lost pirate (Brandon Espinonza) worked so well.

The score, having been written by current pop and rock artists, bring new styles to each song, with specific and distinctive sounds from each artist. (“Hero is my Middle Name” could slot very nicely into Kinky Boots, having also been written by Cyndi Lauper).

It’s refreshing to see such vibrancy, and imagination on a Broadway stage. And, who doesn’t love a sea of bubbles and beach balls at the end of a show?

Spongebob The Musical closes on September 16th for a refurb of The Palace Theatre after a 10 month run.