A celebration of the cultural diversity of the Arctic 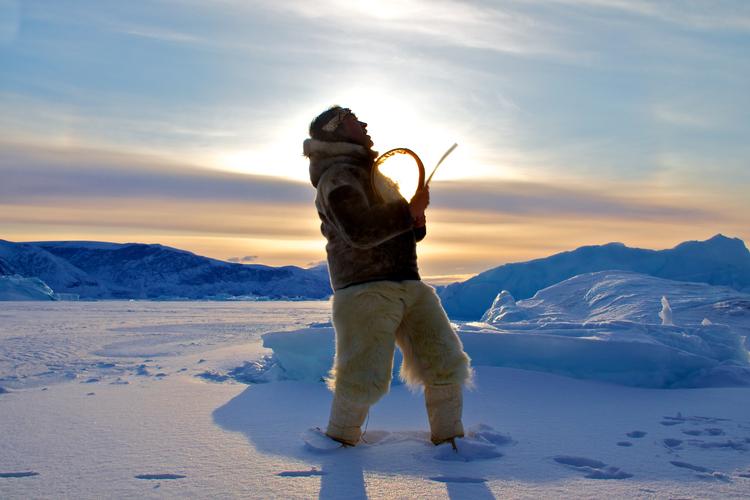 While I absolutely believe that the British Museum looks after its visitors and assures that social distancing is in place, I doubt the same about getting there by public transport from train zone 6 – and therefore have embraced Magnetic North, an online event accompanying their exhibition on the arctic.

For ninety YouTube minutes, I will listen to musicians, dancers, activists, poets, storytellers and shamans from the far north, to distorted strings, drums, flutes and guitars and to the almost omnipresent howling winds. We are shown meditative snowy landscapes, waterfalls both frozen and in flow, vistas of ice floating surrounded by whales, huskies, seagulls and polar bears – and witness more and more cracks appear in the wide land mass, a disrupted desert with shattered ice where before one expected an endless white canvas. More about expectations of the eternal ice later.

The fascinating myth about how the sea creatures entered the ocean is shared and why shamans always remind us humans of our life and to live it, as life is everything and everything is life. That there is no beginning and no end, that life has no death and therefore cannot die. Wow.

Arctic cultures have been around for over 50,000 years. Those cultures were manipulated into believing that their ways of life had been wrong and pushed into a lifestyle of destruction, competition and consumption. They were also forced to adapt to a mindset which aims to prove you, the individual, are not a loser rather than driven by respect for others. Those “others” include ancestors. Not only ancestors of the past but also those of the present and of the future, a worldview intentionally eliminated by textbook colonisation: by nurturing fear, dividing people, by control and by creating dependency, then demanding thankfulness – and once all of this has been accomplished, to be finally called one of us, the so-called civilised world.

In the undeniable event of climate change, everything once loved, has turned into a destructive force, even fire and water, and growing up with this anxiety, climate activists become younger also because “we cannot trust our roots anymore”. This is sad, scary, hopeful and optimistic at the same time – with the changes of the land, awareness and activism adapted and continue to do so: Climate change debates are no longer efforts made by governments owning land for profit, but after years of continuous, often exhausting efforts, include those cultures who maintained the land and its wildlife for millennia. It is them who now emphasize that all social issues are leading back to climate change, not just in the arctic. Here, a new generation has found in the climate breakdown a new confidence, a mission, something to move on for, and they are here tonight and share their stories. Sometimes poetic, sometimes political, and often combined.

A lot of truths and accusations must hurt the average museum visitor. This makes this event, and the fact that it can and should be accessed anywhere in the world, even more timely. In times in which people are no longer connected but divided, is the positive message shared tonight that there is still time to reconnect the trinity of mind, heart, and spirit. And that we can take control of our actions and decisions. Global climate justice means that those who need it most, receive it. I only hope that people not having given up on educating others on uncomfortable facts will be offered more beautiful, aesthetic formats like these, combining history, arts, and culture with recent topics relevant to each of us.