Gettin' the band back together - Review - Belasco Theatre

We went to Broadway to review some shows for you.. 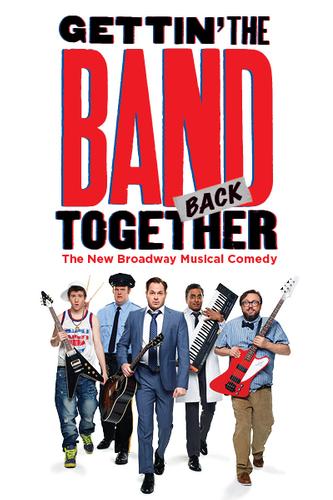 It’s not often that you get a completely original musical - especially on Broadway. The plot was created from improvisations of real stories that people in the industry have been through. It makes you think about your childhood dreams and the reasons you left them, and what could happen if you ventured back in that direction.

We meet Mitch (Mitchell Jarvis) who loses his Stock Broking Wall Street job on his 40th birthday and has to move back to New Jersey to live with his mum, much to his annoyance. His mum, played by Marilu Henner is fabulous and sassy, but is also been struck with financial struggles and can’t pay her rent.
The house is going to be taken back by Tygen Billows (Brandon Williams) who was the high school bully and now owns most real estate in the area. He is a man of few (hilarious) words, mostly unfinished quotes: “My dad always said, there are two kinds of people in this world..”
The only way that Tygen will let the rent issue slide, is if Mitch agrees to get his high school band, Juggernaut, back together and compete against Tygens’ band, Mouthfeel, for the title of ‘best band in Western Eastern Central Middlesex County’.
We meet the other members of Juggernaut who, conveniently, never left the town. They’ve become an overweight high school maths teacher, the local cop, and a dermatologist. The final member of the band died whilst performing in a Meatloaf tribute and so the hunt is on to find the final member of the group and compete to prove themselves...

There are parts of the show which are hilarious. A couple of personal highlights include the song “I slept with your mum” and the scene which turns into a rave at a Jewish wedding. Some of the songs are relatively forgettable, however the title song is so catchy you can’t help but walk out singing.
The show does have a phenomenal cast and, although it’ll really resonates with the slightly older audience members (who graduated high school more than 4 years ago like me) I still left being reminded that you have to follow your dreams, even when they’re not what society may call ‘conventional’. If I had a high school band, I’d definitely be getting them back together!!