In Search of a White Identity - News 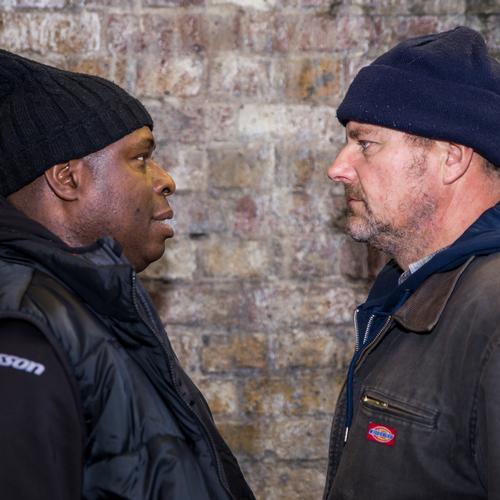 Cliffordkuju Henry’s In Search of a White Identity is a fast-paced 30-minute new play which had been originally performed as part of the work-in-progress during The Actors Centre’s 2019 Working Class Season and has been produced by Toad in the Hole Theatre.

Childhood friends Mickey (Drew Edwards) and Patrick (Cliffordkuju Henry) find themselves sharing a cell following their arrests on the same Black lives Matter march although protesting from opposite sides. Mickey, a disillusioned builder, feels pushed out of his "own country" through increased immigration and cheaper builders arriving and undercutting his business. Patrick's experience in "his own country" is of an unwelcoming violent country where he has struggled with his own identity.

Allegedly "we all got on in the 70s" according to Mickey. However, he soon learns that Patrick's experience was one of fear and never feeling truly being accepted in England. As with many memories, it’s one of selected nostalgia.

The actor's dynamics work brilliantly as they are held together in the enclosed environment of the police cell. I felt that the stage setting prevented the argument from exploding into a physical fight as both parties knew they were being watched by the police.
As the performance develops and the friendship rekindles, the question isn't solely about "Searching for White Identity", but the search of Identity that many people encounter as they reach a certain age: life is rarely as one envisages it to be. Each of us is shaped by our history.
Directer Victoria Evaristo has created a brilliant platform for this hard-hitting play which allows the audience to see both characters' opinions and arguments in an understanding empathetic manner regardless of race and colour.

The show is streaming from 27 November - 6 December