A magical fusion of theatre and cinema 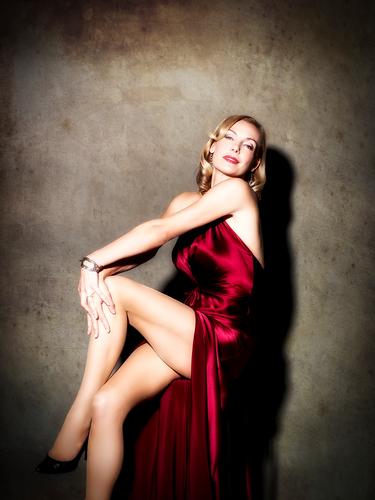 Rendezvous with Marlene is a highly personal piece to Ute Lemper, as the show is based on a three-hour phone call she received out of the blue from Dietrich in 1988. The icon looked back on her vast career from her beginnings in the Weimar cabaret to her breakthrough in the film Blue Angel, from entertaining the Allied troops during the Second World War to reinventing herself as a star of the world’s greatest concert halls. As  Dietrich got older she felt her legend could not be embellished anymore, she famously didn’t leave her  Parisian apartment. She kept company to her telephone, making calls to her old colleagues, world leaders,  and indeed the newcomer already compared to her. The show is delivered as a dialogue between Dietrich and Lemper, and where Dietrich’s story ends Lemper picks up the baton.

Songs are at the heart of this evening and Lemper gives the Dietrich repertoire a fresh spin with new arrangements provided by a five-piece-band alongside her sultry and jazzy vocals, and often sings the material better than the original. Expect the expected, from the greatest hits like Lili Marlene, Falling in Love  Again to her heartbreaking anti-war anthem with Where Have All The Flowers Gone. It’s with songs like No  Me Quittes Pas, dedicated to the love of her life Jean Gabin, and Que reste-t-il de nos amours / I Wish You  Love sung tenderly to Edith Piaf, a woman whom she was both a stage mother and lover after midnight, is where Lemper serves us a glimpse of the private and vulnerable side of Dietrich. She said she always guarded and kept separate her private life from her public persona, and Illusions perfectly captures the duality of this aspect of her character.

So why tell Dietrich’s story now? This one-woman-show is more than just a filmed cabaret. It is a cinematic performance, richly layered with historical images and videos, staged all over the Club Cummings, perfectly capturing the complexity of Dietrich. She was a trailblazer and in so many ways ahead of her time. Dietrich is a modern woman, who was not afraid to challenge the men around her (and they were powerful, ranging from General Eisenhower to her famous directors), being openly bisexual, and sticking to her political views whilst denouncing her German citizenship and brushing off lucrative offers to perform for the Nazi regime. In the current highly polarised political climate around the world, we need more people like Dietrich, who fought to bring us together (in later life even performing in her native Germany despite the bomb threats and protests due to her actions during the war).

Lemper’s script and performance is not a caricature, which there are so many of Dietrich, but rather a fully-fledged woman of today. She doesn’t copy her delivery or voice but makes each song and story her own,  expressing a range of emotions with her big eyes. And whilst Dietrich is long gone, Lemper continues the great tradition of storytelling through song, inhabiting Dietrich’s ability to be at ease with love, comedy, and taboos. This is a plea to the world that we must never forget what came before and not to repeat the mistakes of the past.