Next Thing You Know - Review - The Garden Theatre at The Eagle

A musical about confronting adulthood in the city that never sleeps 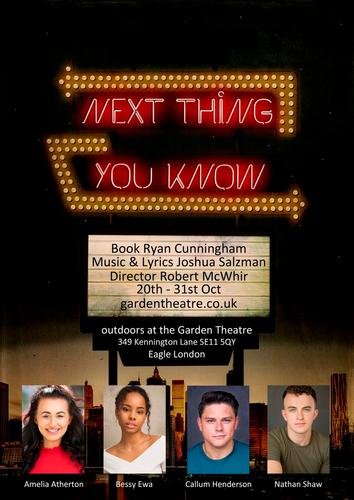 Set in New York, Next Thing You Know follows the lives of four friends in their late 20’s – Waverly (Bessy Ewa), Darren (Nathan Shaw), Lisa (Amelia Atherton), and Luke (Calum Henderson) – and their preconceived notions about what their lives are going to be.

After Fanny and Stella and Pippin, it is the third musical arriving at the Eagle Pub’s Garden Theatre, a cosy, socially distancing, and heated garden-pub theatre. It is directed by Robert McWhir.

Waverly aspires to be an actress and works in a bar. She is offered a job for an important law firm. Darren, her boyfriend, works in an office but spends his nights writing theatre plays. The couple struggles to maintain a good relationship, especially because they don’t communicate much. Luke is Darren’s colleague and his father is a theatrical agent. Also working at the café is Lisa, a singer who dreams about leaving New York and moving to California unless she meets her Ms. Right first. Amelia Atherton has impressive strong vocals, and she portrays a funny and lovable character.

Nathan Shaw and Calum Anderson play with great enthusiasm and energy Darren and Luke, with a really funny moment when they are performing “The way to get a girl”. The other songs talk about things affecting young people going through a “Quarter-life crisis” (an expression used a few times): smoking cigarettes, drinking too much, sex and relationships, with some references to the Covid pandemic.

In its 90 minutes (with a brief interval) the show tries to raise some bigger questions: does marrying a nice guy mean you’re settling down or just settling? Does taking a nine-to-five job equal giving up or growing up? The plot, unfortunately, doesn’t punch you in the stomach as it should, given the topics.

The musical is basically a story of a young couple breaking up and getting back together when they realise that growing up means leave some (impossible) dreams behind. There is little real drama, and dialogues sound a bit cliché’.

Next thing you know, solidly performed by a young cast of four fresh out of drama school, provides you with an evening of much-needed escapism with its catchy songs and some funny jokes, and it is running at The Garden Theatre until Saturday, October 31st.