Dante’s In Furlough - Review - The Vaults 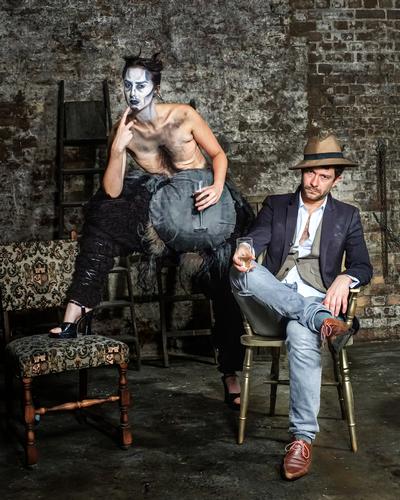 Not to be defeated by an early closure of The Vaults Festival this year, Dante’s In Furlough (pun intended but ultimately irrelevant) lets an audience of lockdown lackeys loose on their innermost desires and depravities.

With crude yet devilishly distinguished text lifted from a 1970s playboy poem by Shel Silverstein, the cast improvise their way around the underground maze in a covid secure fashion with ease.

The Vaults are absolutely perfect for this piece, each new tunnel presenting itself as a new gateway to a deeper realm of hell. Set designer (Thomas Kirk Shannon) and scenic artists (Ellen Camilla Rose and Sally Somerville) really had their work cut out for them with thirty thousand square feet of dingy London cavities to turn into the kinds of swanky bars, carnivals and cabarets that eternal damnation may be home to but there is no denying that they did just that and with brilliant results. Discovering each new room was like exploring a pariah’s playground, particularly the carnival scene which was a marvellously maddening event in itself.

The entire production is complimented by Clancy Flynn’s lighting and soundtracked by Daffyd Gough. One room was so full of smoke and draped with gloomily lit rags that it was terrifying for a moment to think we were being goaded into a dangerous underworld. More incredible moments like this to create a sense of descension could have created a greater sense of journey.

The audience is split into four different groups, allowed in at staggered intervals presumably to keep to government regulations on safety in these times. Then one of the four characters guides you through the rooms, encouraging spectators to play games and win souls in order to be worthy of being invited into the Devil’s wedding at the climax of the show.

In this particular instance, we were shepherded by Nancy (Isabella Leung) and glimpsed another servant of hades (Janina Smith) before sitting down to drinks in the finale to watch the showdown between Billy Markham (Simon Grujich) and The Devil (Owen Jenkins). Directed by Sam Carrack and Costumed by Maeve Black, each character seemed to have clear qualities and motives, personalities fleshed out by performance, plot and primping, yet there was something lacking.

This was certainly an immersive experience that built a whole new world for you to play in but where this performance fell short was in the detail of delivery, purpose of the plot and the finish of the foray. Silverstein’s poem as the storyline was a stroke of brilliance but lack of confidence in improvising around it left it as the only surviving substance amidst profanities for profanity’s sake. On more than one occasion the control slipped through the performer’s grasp, resulting in a kind of purgatory for the audience as we all wondered what was meant to be happening now. As the run continues these details can be finessed and characters can be coloured even further.

If the fun-factor is already off-the-charts, then the full potential of such a great venue and concept will surely be fulfilled in the weeks to come. Such a sordid affair is so sorely needed in the current climate and if there was anywhere best to let off steam and enjoy an evening ridden of rules it is here, amongst the felons and the fools.

It runs until 31 December.