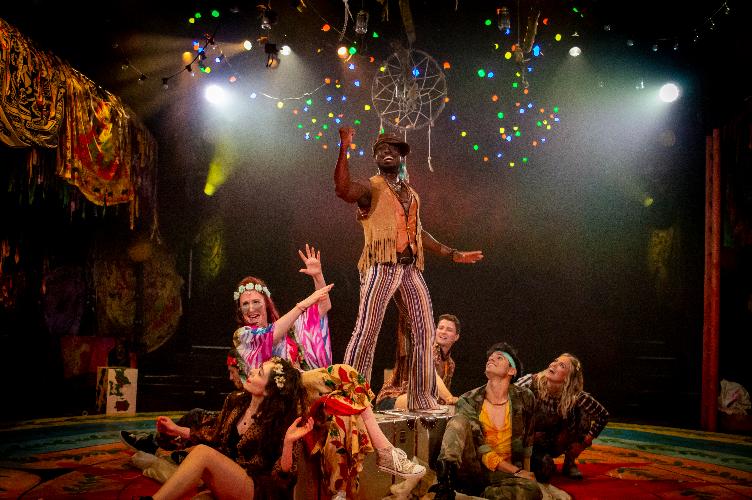 Theatre Cafe provided shelter from the rain yesterday afternoon by launching their brand new venture with Adam Blanshay: The Theatre Channel. It is a series of all singing and dancing 10  musical theatre episodes of half an hour each, featuring stars of the stage alongside the regular  Café Four. Each performer had been asked to perform material they have never sung before or to try out roles they might not otherwise be able to play. The premise, as described by the project’s  director and choreographer, Bill Deamer, is to showcase “what musical theatre people can do and  how viable we are.”

The first episode consists of seven staged musical theatre numbers, all rehearsed, recorded, and filmed at the cafe following social distancing rules. Café Four (Alyn Hawke, Emily Langham,  Sadie-Jean Shirley, and Alex Woodward) opens the episode with a fitting Kander and Ebb number  Coffee in a Cardboard Cup, singing and dancing around the venue. Carrie Hope-Fletcher and  Oliver Ormson transform the cafe into Seymour’s flower shop with Suddenly Seymour, Jodie  Steele takes us literally to heavens with her rooftop rendition of Heaven on Their Minds, and Tarinn  Callender and Lucie Jones evoke the on and off-stage drama with On Broadway and Maybe This  Time. The real goosebump moments come from Matt Henry and Jenna Russell. Henry transcends the screen with his rousing vocals and performance on the lesser known classic Let It Sing from  Violet. Russell gives a fully embodied performance of the Sondheim staple, The Ladies Who  Lunch, where every nuance of a word and facial expression is fully calculated and every punch hits the target. Her performance makes me want to see her tackle another Sondheim diva,  Madame Rose. One day, please.

The producer Adam Blanshay promises “lots of surprises” from the series, including themed seasonal episodes, to one showcasing new writing, and stars from Broadway to Bollywood. It is a  bold venture, providing over 100 paid work opportunities to performers, creatives and technicians for the price of £12 an episode with unlimited views. The show’s Musical Director Michael England  explains: “We cannot devalue what we do.” And, rightly so, the talent is high from the lighting to the finished product, evoking the experience of a real live event. The first episode sets the benchmark very high for future episodes.

Grab the people within your bubble and enjoy some musical theatre magic from the comfort of your home. The first episode is available now for purchase and download here

Once purchased, you can view the episode unlimited times. Four new episodes are planned for release in 2020, with the second themed episode to be released at Halloween.