‘Nice to meet you. I’m excited about doing this with you. We don’t know each other, and that’s exciting to me" 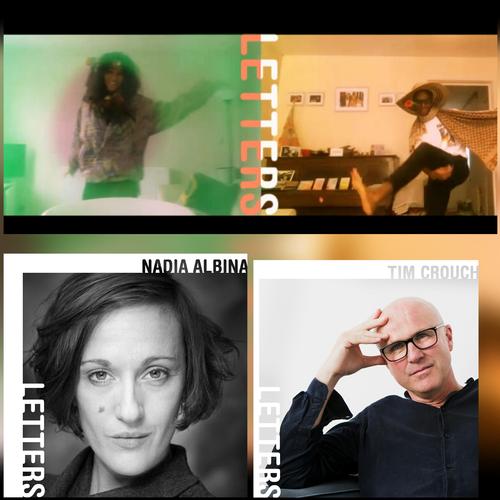 One of the knock-on effects of the current pandemic is that theatres have had to rise to the challenge of being ever more inventive in terms of form and content; Letters from The Gate Theatre follows this trend. Back in March, they asked nine different pairs of performers to write letters to each other -  some pairs already knew each other, and some didn’t. They were given guidance as to what to write in the text and then these were sent out to their partners in a box with instructions, some rudimentary props and bits of costume. The pair then meet up online to open their letters and instantly develop a short show out of these and what they find in the box. The trajectory of the next thirty minutes is totally in the hands of the two performers.

On the evening I attended, the duo were Nadia Albina and Tim Crouch; I thought the pairing would be an interesting combination to watch, and so it proved. Having introduced themselves they disappeared off camera for a few moments and reappeared in “costume” – Nadia in a jauntily angled hat and Tim in a snazzy gold wig and each read out the first part of the letters they had received. These were dated in May so were full of lockdown details which I’m sure we all remember and are trembling on the brink of going back to. A chalkboard was then deployed to sketch each other – I’d definitely have found that daunting. The main element was that each had chosen a poem for the other to read out and by one of those spookily chance occurrences it transpired they had both chosen the same poet though not poem. The readings were suffused with a wistful melancholy and there was a sense of emotion that came across even down the unforgiving lens of a camera. The show concluded with a joyful finale utilising a range of props from the supplied box. Just for a brief moment, it was party time.

There was no narrative, no characters and emotions were allowed to develop naturally out of the prompts the Gate had evidently given in their guidelines. Nadia and Tim‘s dynamic was the paramount factor and what emerged was not so much a play as the act of play itself - in the sense of an activity aiming at enjoyment. It felt like we were being made privy to a private moment between two people who had not seen each other for a while and were revelling in the moment of reconnecting. A nice metaphor for the way many of us currently feel, I would venture.

Letters continues to play on dates throughout this and next month. The remaining pairings are: