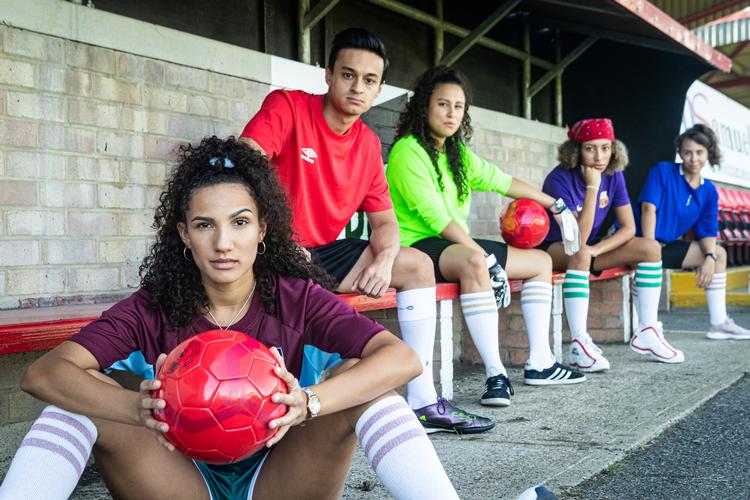 A show with virtually an all-female cast is always a welcomed sight and something that seems to be lacking in the theatre industry lately, but to see the show tackle the very much male-orientated football industry and more importantly highlighting women’s football is not only refreshing but invigorating. ‘Squad Goals’ very much does that and more; tackling the limits opportunities women have to face while the other gender seems to have such vast chances at one of the world most successful and followed professions.

Revolving around a football community day, we are immersed into the lives of the young female hopefuls in search of an illustrious opportunity when we hear a scout for the women’s football team is coming to watch the match. From there we begin to see not just the idolisation and struggles with what we know as the beautiful game as family, careers and aspirations all come to light with lighthearted comedic touches.

With the added help of the show itself being staged inside a football stadium, the instant feel for a football community day takes effect once you sit inside the stands and the girls begin to interact and hype the audience, engaging us into their lives whilst setting the tone for the evening ahead. The initial interaction and reaction from the women are fantastic, standouts were Amanda (Bessy Ewa) who stayed in character throughout the interaction with the audience fantastically and Mel (Holly Richard Smith) whose natural and endearing charisma made her a very likeable character most audience members were drawn to support throughout.

A special mention would have to go to choreographer Sundeep Saini and her fantastic choreography. The football match themed second act infused with a dance mash-up in such a small space deserved tremendous recognition, the dance section was lively, fresh and shows the way theatre and sport can bring a community together. The audience cheered, clapped and danced in their seats as they supported their team, almost bridging the difference between these two often divided hobbies.

Though the play itself is a heartfelt look into the young women’s lives however it does not explore enough to really empathise with the girls, as the scenes feel too short to build up that relationship. During the evening when the crowds split and each “team” are delivered their own storyline, meaning you miss the other sides and lack connection to the respective storyline as each team miss the chance of an introduction to new characters.

Despite the minor areas that cloud the show, the immersive play is a brilliantly fun evening, with humour that takes you back to the end of your school days. Director, Michelle Payne, has still written a piece that brings with it that goal-scoring feeling of triumph for women’s football, a feeling that one can only imagine a match-winning goal feels like.

The shows run until 17 October.