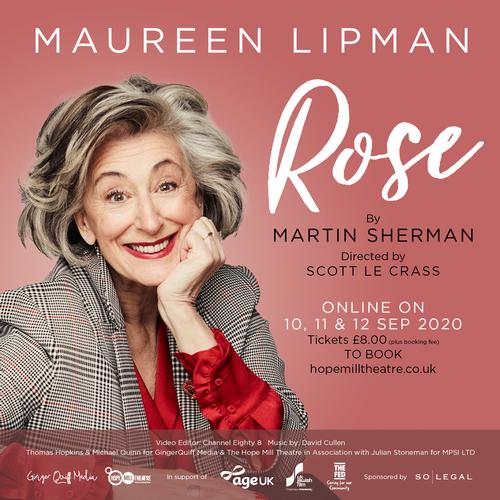 You will need to be sharp to catch Rose, as it is only available for three days (September 10 – 12); and you should, because very good it is. This streamed play from the pen of Martin Sherman is performed by Maureen Lipman from the currently empty Hope Mill Theatre in Manchester in support of the charities: Age UK, The Fed, and UK Jewish Film. Unlike most of the monologues currently on the internet, this is a full-length play in two halves and containing a well-constructed beginning, middle and end. The central and only part requires an actor of skill, nuance and stamina and in Maureen Lipman’s tour de force performance that is what we are treated to for over two hours.

Rose (in fact Rose Rose) is eighty and sitting shiva (a period of ritual mourning) following the passing of a young girl. Who this is, does not become apparent until towards the end of the play, but it is clearly a death which has affected her significantly. While mourning she reflects on her past life which, while not spectacular, spans continents and encompasses era-defining moments. Rose first recalls her childhood in a Ukrainian shtetl in the early part of the last century. Moving to the ghetto in Warsaw she eventually finds herself caught up in the horrors of the Holocaust and after the war finds herself one of the passengers on the Exodus sailing to newly formed Palestine. Eventually, in pursuit of the American Dream, she migrates to Atlantic City and ultimately runs a hotel in Miami. A life, as Lady Bracknell declares, crowded with incident.

Martin Sherman’s script encompasses the pains and pleasures of a life fully lived life as Rose analyses her relationships with her parents, her siblings, her two husbands, her children and grandchildren. Above all she considers her relationship with herself as she moves from an unquestioned faith to a form of agnosticism, from a cheerful naivety to a healthy cynicism. Her overview of the Jewish experience in the last century may be personal but it is also universal.

Maureen Lipman gives a magnificent performance which fully underlines her status as a major actor (those BT ads have cast a long shadow) and show how she is able to handle intense drama with as much commitment as the more comic roles she plays. It is a part that she seems destined to have inhabited and she seizes it with relish. She remains seated throughout, leaping to her feet just briefly at a telling moment, and much of the work is done through her eyes which blaze with intensity as she recalls the incidents both personal and universal that have shaped her life throughout the twentieth century. Lipman keeps her gestures minimal and controlled and her voice is steady and pulls the viewer in.

Scott Le Crass’s direction is also mostly restrained using newsreels images to set things in context and some plangent music to evoke emotion. However, some of the cuts between camera angles can be a little over busy and distracting – almost as though they are trying a mite too hard to compensate for the lack of performance movement. Occasionally there are shots taken from behind; these are poignant as we see Lipman performing to an empty auditorium.