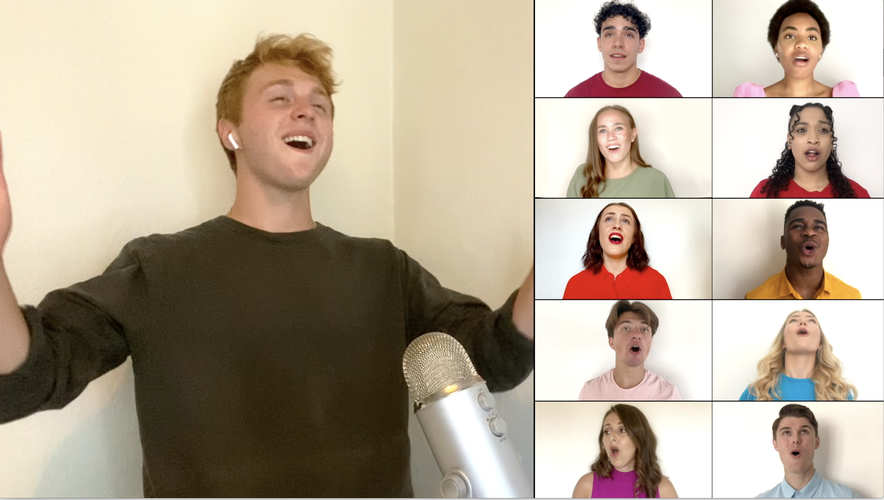 This unique concert version of Godspell marks the shows 50th Anniversary. The show, composed by Stephen Schwartz with book by John-Michael Tebelak, has reunited Darren Day and Ruthie Henshall (1993 studio recording) along with other well known West End performers such as Sam Tutty, Jodie Steele and Ria Jones to create an online celebration.

Raising money for three charities: Hope Mill Theatre (A Factory of Creativity CIO), Acting For Others, and National AIDS Trust, Godspell looks towards a brighter future post-lockdown. Through its themes of hope, support and gratitude it reminds viewers that we can come together as a community, to go from discord to harmony and Jodie Steele's emotional rendition of 'Beautiful City' sums the hopeful message up excellently.

Featuring social distanced recordings cleverly put together using creative animation visuals we see the performers in a variety of places including their homes, gardens, churches and even in the bath. The creative editor, John Walsh Brannoch, and director, Michael Strassen, have worked hard to create a meaningful concert that is not only vocally impressive but also visually interesting too.

A lot of the songs have a gospel feel to them. 'Light of the World', 'Bless The Lord' and 'We Beseech Thee' in particular stand out for their powerful, uplifting style. However, as you would expect with any musical, there is a range of music styles that makes Godspell interesting and will engage most viewers. In addition to the talented lead singers, the ensemble is used well throughout the performances, especially in the opening 'Prepare Ye Way of the Lord' where they help build the excitement and passion in the song. It is also fantastic to see the band playing on-screen during some of the songs. It is times like this that we all appreciate the impact that live music has and whilst this production may not be live it is still brilliant to hear performances you otherwise wouldn't have.

As with all online streams, there are some technical issues but when the future of theatre is so unknown and live performances are so restricted it is great that theatres, companies and producers are coming together and creating online content. The benefit of streams such as this one is that you can play it as many times as you wish in the 24 hours and can do so from wherever you may be in the world. At just under an hour's duration and raising money for three fantastic charities you should definitely purchase your ticket, sit back and enjoy Godspell.