The first London Fringe production since Lockdown has opened 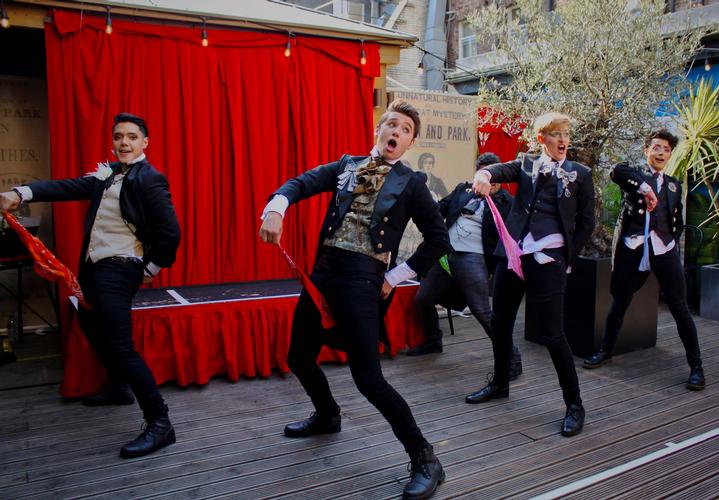 It was promised that the London Fringe Theatre would burst back into life after the lockdown in the beginning of August with the open-air revival of a musical, Fanny and Stella. I am not going to lie, I was sceptical if the performance was going to go ahead, but to my delight, and to many others, the show made its opening night last night at the newly renovated Garden Theatre at the Eagle Pub in Vauxhall. The atmosphere was tangibly excited, as many, like myself, came to see their first live theatre performance since March, defying the sweltering heatwave to enjoy a shared experience with fellow audience members. And the producers certainly kept their end of the bargain!

In Victorian London in 1871 Ernest Boulton and Frederick William Park, also known as Fanny and Stella, were known for taking pleasure in dressing up in women’s clothes and catching the eyes and hearts of gentlemen. They often performed in amateur theatres but also ventured out in their frocks into the West End’s entertainment hotspots where men met other men for sex. In the musical, Fanny and Stella take their fantastical story on the road and tell the tale of their frolics, love affairs, and how they got arrested, charged, and surprisingly acquitted.

Glenn Chandler (book and lyrics) and Charles Miller (score) have transformed this true story into a musical “romp” packed with puns (musical theatre fans, look out for the many song references), comedy songs, a cavalcade of flamboyant characters, and optimism at its heart. If romp was the aim, Steven Dexter’s production succeeds in flying colours, as the musical’s strength lies within its comedy, tongue in cheek moments, and constant camp. However the music hall-esque show lacks a little depth, as it lightly touches on the issues and attitudes of identity and gay affairs in the Victorian times, presenting it mostly humorously.

The all-male cast of six actors cook up quite a storm on the stage, dancing energetically through Nick Winston’s choreography, and playing a multitude of roles. Mention must be made to Mark Pearce, who helms the ensemble with his many memorable comic characters from the Scottish Landlady to the Judge, and to Kurt Kansley’s Lord Arthur Clinton, who quickly discovers that with these ladies romance and finances won’t mix. Stella’s love triangle partners are played by dashing Alex Lodge and Joaquin Pedro Valdes, and both sing and dance with ease and verve.

Comedy queen of the show is Kane Verrall as Fanny. With a constant twinkle in his eye and quick- witted digs he effortlessly delivers hilarious moments and my highlights were the songs: Has Anyone Seen My Fanny and Your Mother. Jed Berry, as Stella, equally shines in the comedy with his sister Fanny, but he also has the tougher job of trying to convey the piece’s emotional resonance. Berry cleverly tightropes the balance of comedy and drama, and finds nuances with his internal turmoil of being true to himself by dressing up as a woman, yet still yearning for true love, but sadly, even the score doesn’t afford Berry with a full ballad to express all he is feeling.

The emotional peak of the evening comes when Stella exclaims how she doesn’t want to be kept in the cage. There definitely would have been enough juice in this statement alone for a whole other musical drama, but this musical comedy is filled with heart and charm, which overshadows these shortcomings. And like Stella, when she doesn’t get the guy, she remains hopeful that Fanny and Stella’s actions stirred something new that could even change the law and gay couples could walk down the street together wearing whatever they like in the future. If positive change is this musical’s message, Fanny and Stella is the perfect tonic during these uncertain times.

P.S. Special mention must be made to the Eagle staff and the production team for looking after its audience so well: by being welcoming, attentive, and guiding us through the Covid-19 protocol they had in place to make everyone feel safe and calm, allowing us above all to enjoy the evening. The procedure in brief included temperature checks upon arrival, waiting in allocated tables inside the bar before being taken into our social distanced seats in the lovely garden, wearing a mask throughout the performance, and having hand sanitisers available all around the venue. They even looked after my foldable bike, so if you’re hesitant of using public transport, cycling is always a great option, and I am certain there are bike racks nearby too. But be quick, most performances are already sold out!