Shake it Up: The Improvised Shakespeare Show - Review

Part of The New Normal, a Festival of the Arts 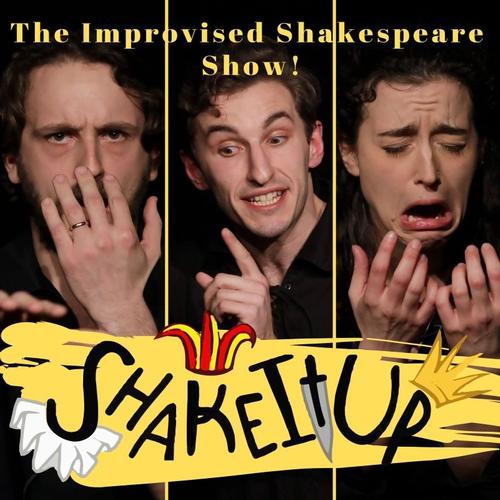 Shakespeare’s been done, it is safe to say. Everyone’s seen a bastardised modernisation of Romeo and Juliet that did not change their life. What they have not seen (and very much need to) is a bunch of misfits improvising an entirely new play every night with raucous laughter, live music, and a fond nod to the bard. This is the kind of jazzing up Shakesy boy needs.

Shake It Up Theatre presents an hour of brand new Shakespeare for one night only each night they perform. It would not spoil things to say that on this particular evening they performed the opening and closing performance of “The Tragedy of Amy of Skegness” a tale that turned out to be full of murder, betrayal and amusement arcades; classic Shakespeare.

Audience participation is encouraged to inform the basics of the plot but unlike other improvisational comedy shows that I have seen, the players do not use this as a crutch, their confidence in the game from the beginning reassures the audience that we are allowed to play but if things get messy, the actors hold the dice.

With absolutely no props or set and a festival kitchen crew to contend with, the troupe got to work in the space. The dialogue was fast, flamboyant and fantastic. Not quite iambic but seeing several cast members pull soliloquies, monologues and rhyming couplets out of thin-air made for impressive entertainment, especially when the jokes landed as effortlessly as they did. It also meant that the Shakespearean element was very accessible; peppering their speech with the bard’s language for die-hard fans as well as dropping in topical pop-culture or satire references for younger crowd members.

The cast are quick-witted, inexhaustible and absolutely hysterical. Full of energy they sang, mimed and multi-rolled all while being socially distanced. The audience appeared to pick their favourites early on, cheering the elegant protagonist, Amy (Joe Prestwich) or booing and hissing at the villainous Big Bertha (James Alston). Yet each cast member would surprise them in turn with improvised singing from the King (James Dart) many a melodious monologue from Meredith (Abigail Clay) or deciphering a woeful “European” accent from Dudley (Fred Di Rosa). Alston, Prestwich and Dart multi-rolling as the grotesque and bizarrely acrobatic witches were a particular highlight. Each scene was accompanied by intensely theatrical compositions from a string trio of guitar (Caleb Mitchell), violin (Rose Trustman), and ukulele (Edward Kaye).

With the hope that the cast expands to showcase more diverse improvising thespians, it is clear that the talent and trust of such a collective no doubt will pave the way for an exciting future. To see this kind of comedy gold emerging in the face of adversity is a very encouraging and intrinsic inspiration. O for a muse of fire in a post-lockdown world of theatre.

Click here for the full program of the Festival